What the general listening public perceives of music is a delightful, or passionate, or energetic, or doleful, musical surface sparkling with percussion, or droning with bassoons, or barking with trumpets and horns, or singing with violins. But how composers construct this music is quite different from how you might think...


That was the beginning of Scheherezade by Rimsky-Korsakov, a brilliant and colorful orchestral showpiece that is a pretty representative example of the kind of musical surface I was referring to. Let's have a look at the opening. First of all, to look at the underlying structure instead of the surface, let's eliminate all that orchestral color. Here is a piano transcription of the first page:


The first thing we notice is that all that fantasy and color comes in two six-measure phrases and one four-measure phrase. After this opening page, there is a return to the opening theme, so this page is a complete musical idea. Now, those two six measure phrases are actually four-measure phrases with extensions. One of the ways composers are creative is to take fundamental building blocks, like four-measure phrases, and expand them. Rimsky-Korsakov's expansion consists of adding a one-measure silence and repeating the last of the four measures a semi-tone lower: expansion by adding two measures at the end. Other times composers might expand the middle of the phrase or by having a measure or two of introduction that expands the beginning of the phrase. What is happening here harmonically is that the music starts in E minor, the tonic and the first four measures end on the dominant of the dominant. Then the extension of the phrase turns this into a Neapolitan sixth. Quite clever!

I've been using the neutral word 'phrase', but there are more precise terms for kinds of phrases. For example, the 'period' is a very specific and common kind of phrase. Schoenberg in his Structural Functions of Harmony describes it like this (the Roman numerals stand for chords built on those scale degrees; "I" stands for a chord on the tonic "V" on the dominant and so on; upper case is major, lower case is minor):


the period consists of two segments of four measures each. The first, the antecedent, may end on V, either through mere interchange (e.g. I-V-I-V) or in a more elaborate manner, or through a half-cadence with or without substitutes. In the minor, the procedure is similar.

With those few words Schoenberg describes perhaps the most typical way of constructing a fundamental musical idea, used by hundreds of composers over hundreds of years, but one that few listeners are consciously aware of. He is describing what he calls a "school-form" or what might be better called in English a "theoretical model" for musical phrases. I might be tempted to call it a Platonic Idea or Form of a phrase, in that it captures the essence of the period whereas each example in the real world may depart from or vary the model in different ways.

Here is an example chosen by Schoenberg: the opening of the second movement of Beethoven's first piano sonata, op. 2 no. 1:


The opening period consists of the first eight measures, the first line in the score and half of the second line. Here is Schoenberg's harmonic analysis:

Now, let's listen to that opening. The first period takes up just under forty seconds of playing time:


The basic idea is to clearly state the harmonic structure in a precise and efficient way: one short phrase starting on the tonic and ending on the dominant followed by a phrase of equal length ending with a full cadence on the tonic. To give you the full weight of just how ubiquitous this structure is I should really offer hundreds of examples, but neither of us has that much time! Would you accept just one other example in a different medium and from decades earlier? It took me less than a minute to find this example. Here is the opening of Haydn's String Quartet op 20 no 1, the second movement:


It is in the key of E flat major and as you can see, it follows Schoenberg's prescription exactly. It begins with I and the first four measures end with a half cadence on V (in first inversion) and the consequent phrase begins on I and ends with a perfect cadence on I, just as did the Beethoven example. Here is performance of the whole movement. This opening section is repeated.


I should offer a historical caveat here: as the German philosopher Hegel mentioned, "the owl of Minerva flies only at dusk" meaning that a sober understanding of a particular event or phenomenon in history only comes after the fact. Haydn and Beethoven probably did not sit down and say to themselves "I think I will start off with a nice period" as the term was invented long after, probably by the 19th century theorist A. B. Marx (1795 - 1866): 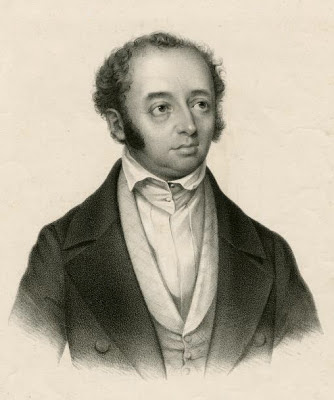 The remarkable thing is how widely the basic forms were used, which probably means they reflect a fundamental way that humans like to organize musical sounds.
Posted by Bryan Townsend at 9:46 AM