The Danger of Sokolov 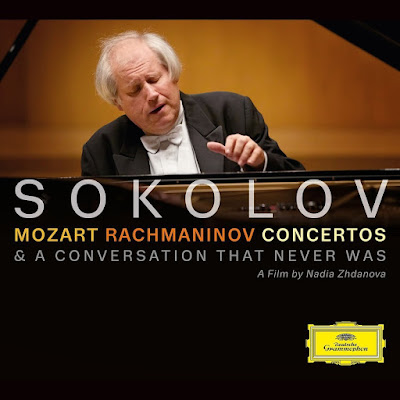 I feel I should, as a public service, warn you about the dangers of extended listening to Grigory Sokolov. On Friday I got the new Deutsche Grammophon release of two archival concerto recordings, one from 1995 (Rachmaninoff Piano Concerto No. 3 at the Proms) and the other 2005 (Mozart Piano Concerto No. 23, K 488 at the Salzburg Festival). I believe that he has, for more than a decade, stopped doing concerto performances. Like Bob Dylan bootlegs, these performances have been floating around on the internet for a while. There are both quite stunning. Mind you, I much prefer his solo performances, but never mind. Also in the package is an hour-long documentary on Sokolov. He refuses to either sit for photo sessions or interviews so the documentary spends most of its time interviewing friends and colleagues. There is some footage from his spectacular win of the Tchaikovsky competition in 1966 when he was sixteen years old. Part of the footage is him tossing off an extremely virtuoso piece by Liszt as if it were nothing. All in all, we do get a sense of Sokolov, known as "Grisha" to everyone that knows him personally, who seems to have been a consummate artist pretty much since he was six years old. What is it with these Russians!

Now we come to the dangers: if you listen to much Sokolov I am afraid that you will find other pianists to be unfulfilling. Last night I attended the first concert in our Pro Musica series with a fine pianist who played Scriabin, Schumann and Liszt. It seemed noisy, unsubtle, muddy and the pieces seemed to have a confused and muddled structure--all of them! Now this might be true, to some extent. My feeling about Schumann is that while his songs are superb, his longer instrumental works tend to not work very well, structurally. Scriabin I have never taken to. And Liszt, while interesting, is often structurally muddled as well. But I have the feeling that I would have enjoyed the concert a lot more were Sokolov playing! Mind you, I think he would have chosen a different program. Another problem was that all three composers seemed to sound rather the same, stylistically.

But the most likely explanation is that I am badly spoiled by listening to Sokolov! Once you get used to the astounding control he has over dynamics and the amazing clarity with which he delivers every texture, other pianists tend to sound ragged and noisy in comparison.

This is a clip of one of the pieces from last night, The Piano Sonata No. 2 by Scriabin played by a different pianist, let me stress.


There doesn't seem to be a clip of Sokolov playing the 2nd Scriabin sonata, but here he is with the 3rd:


I'm not sure if these clips make my point at all, but I don't have time this morning to seek out better ones!
Posted by Bryan Townsend at 10:26 AM

I'm guessing you've explained this already but evidently GS plays the same program for a half year-- right now its three Haydn sonatas and then, after the interval, two Beethoven sonatas, (or he may change the second half after three months)-- wherever he performs. Twenty times, between the 19th October and the 12th December. Amazing.

I have not become aware of how often he changes his concert program. For some reason I thought he stuck to the same program for the whole season. I would LOVE to hear him play some Haydn sonatas. There are people, a couple of German sisters, for example, who attend every single one of his concerts. We need to ask them!

Marc, your linking to Facebook seems to have resulted in a lot of traffic to this post!

I've never 'shared' anything on Facebook that's gotten so many 'likes' as this post; 80+ when last I looked. Let's hope some of them are reading other posts at The Music Salon!

There are a couple of ladies at the Sokholov page who might well be "Germans who attend every single concert". :-)