Last month was the 72nd anniversary of the Battle of the Bulge and yes, there is a musical connection. Usually military bands don't have to actually fight, but on this occasion they did. We learn from Strategypage that:

These American soldiers from the 28th Division Band and Quartermaster Company, stayed and fought Germans in Wiltz, Belgium, until their ammunition was exhausted. Shown at Bastogne, Belgium. 12/20/44.

During the Battle of the Bulge, the Band was placed on the line to defend the Division Headquarters at Wiltz, Luxembourg. In this action, for which the Band was awarded the Meritorious Unit Commendation, all but thirteen of sixty members were killed or captured. Of the thirteen, eleven were wounded. Sergeant Raab avoided capture and helped re-form a new band after the Ardennes campaign.

Here's the photo, before the battle: 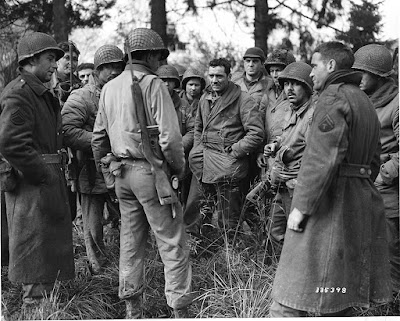 But they got that unit commendation, so there's that...

I honestly don't know what to think about this experiment in synesthesia. I wonder what Debussy would have thought:

On a Friday night in December, I sat in a small room with 33 other audience members, each of us accompanied by a dancer in black. The dancers pulled out blindfolds and covered our eyes, and for a brief moment, all was dark and quiet and freighted with anticipation. Then, as a chamber ensemble began to play Claude Debussy’s String Quartet in G minor, the dancers began to “play” the music on our bodies.

When the music soared, the dancers lifted our feet to mimic the sense of weightlessness. When the music was playful, they tickled our forearms. And when it pressed in intensely, the dancers squeezed our shoulders and rocked our heads.

At times, they held scents near our noses, and wafted a wind across us, and even pressed evocative morsels of food into our mouths—truffle cheese with pop rocks, fizzing as the music rose—as if our entire bodies could be recruited into feeling the mad sensuality of Debussy’s work. As if the idea was to bring us inside the music itself.

The Guardian has pretty much the best classical music coverage in the mass media. They have an article on an interesting exhibit in Paris about the Beethoven myths: Beethoven in dreadlocks … the show that celebrates great myths about the composer:


The French are good at this sort of show, exploring the life and afterlife of a dead genius. Like the Pompidou Centre’s show devoted to Roland Barthes (which opened with by a pristine black 1957 Citroën 19 in all the semiotic pomp conferred on it in Barthes’ essay), this is a vast multi-media celebration. But while that was hagiographic, this is more critical: the Barthes show made critic into icon; le Mythe Beethoven deconstructs the myth and then puts it back together again. In the Salle Pierre Boulez upstairs, there has been a swaggering series of allied concerts, including a fabulous concert performance of Fidelio.

You know how I love to snark at the New Yorker, but they have had some of the funniest cartoons ever. And this piece, the stream-of-consciousness of a reluctant symphony attendee, is really funny. But it's not really about the orchestra, it's really about him.

So this is the Symph-Tacular Winter Series.

Jesus. I could’ve gotten something I wanted.

If you have ever wondered what the New York Philharmonic does when it needs an accordionist, wonder no more, the Wall Street Journal has the answer:

Among its ranks, the New York Philharmonic counts 28 violinists, 11 cellists, four flutists, three trombonists and even one bass trombonist.

But when the call came for an accordionist this past week, the orchestra had to go outside its circle.

The ensemble turned to Bill Schimmel, a New York-based master of the instrument who has made something of a specialty performing with orchestras.

If this article on the tv show Mozart in the Jungle is even halfway correct, I'm going to have to watch it:

If a show can be in love with its subject matter, Mozart in the Jungle has fallen for the strange, motley power of music. Consider this season’s eighth episode, which is structured as a fake documentary about, of all improbable comic devices, a jailhouse Messiaen gig. In order to shoot the segment, a real orchestra and its actor-filled double traveled to Rikers Island and performed for actual detainees, who were genuinely overwhelmed (and said so on camera). What they heard was not a concert of easily digestible pops, but a program of music by the 20th-century French composer Olivier Messiaen, who wrote one his best-known works, Quartet for the End of Time, in a World War II prison camp. Inmate to inmate, composer and audience connected across continents and decades. In the episode, Messiaen’s ecstatic percussion, the bell-like chords, and the eerie electronic cry of the ondes Martenot go gliding over the concertina perimeter toward the East River and the Manhattan skyline. I hope the next time an orchestra administrator claims that the surest way to win new audiences is by spoon-feeding them pabulum, someone will cue up the moist eyes of inmates listening to Turangalila-symphonie.

Also in The Guardian is this article on Ligeti's single, but very odd, opera Le Grand Macabre:


Set in a absurdist land of despots, debauchery and drunkenness, Le Grand Macabre premiered in 1978. Its score is a riot of quotations and pastiche and a huge percussion section that includes “a duck-quacker”, a wind machine, a saucepan and a “large alarm clock”. Ligeti wasn’t sure his work could even be classed as an opera, and despising the then-trendy term anti-opera, Le Grand Macabre thus became the first – and possibly the last – anti-anti-opera.

What gives this essay its undeniable authenticity is that it was written by Elizabeth Watts who is singing the role of Amanda in the upcoming production.

Canada beclowns itself: next year will be the 150th anniversary of Canada's birth as a nation in 1867. In honor of this occasion $500 million dollars have been budgeted for the celebrations. As part of this lavish series of events, there will be a competition for composers to write a new piece for the carillon on Parliament Hill in Ottawa. Commissions for Canadian composers, as suggested by the Canadian League of Composers, are already hilariously low: a five minute work for one or two performers is a mere $2125 CAN. But the miserly prize to the winner of this competition will be, wait for it, $800. For the winner in the Youth category it will be $400. One Canadian composer has already started a protest petition. This isn't a prize, it is an insult.

The Herald of Scotland has a fascinating piece on a revival of an opera by Philip Glass on Kafka's The Trial:

AMERICAN composer Philip Glass has the characteristic dry humour of the city of New York, from where he is speaking to me.

"If you live a long time, you can make a living out of opera," he says, having composed something over thirty works that might be described as such, or as music theatre. Glass's 80th birthday falls in the middle of the run of Scottish performances of a revival of his 2014 chamber opera The Trial, based on the seminal book by Franz Kafka, written 100 years earlier.

For our envoi today, here is an excerpt from Act I of Ligeti's Le Grand Macabre:

Posted by Bryan Townsend at 9:57 AM

New Yorker cartoons are sometimes not only hilarious but often spot on. Sometimes however I don't have a clue as to what is supposed to be funny. Interesting article about the jailhouse Messiaen. Not exactly a typical audience. Something about the context might make them more receptive? I though you might get a kick out of this: https://www.psychologytoday.com/blog/the-athletes-way/201701/the-neurobiology-music-induced-pleasure

That Messiaen premiere in the Stalag is one of the most extraordinary events in music history. I did a whole post on it here:

Thanks for the link, Christine, it looks interesting!