I'm always fascinated by the details, which is why I don't care for what we see in the mass media: they abhor the details! This is a very interesting account, from the inside, about how orchestral auditions really work: at least in Germany. Our guide is Rob Knopper:


The preliminary audition normally consists of a single round. For most instrumentalists that would mean playing part of the first movement of a standard, classical concerto, plus the cadenza, and maybe a bit of the slow movement. In the case of a percussion vacancy, the candidates would probably be required to each play one set study and a long pp<ff>pp roll on the snare drum, maybe Firebird and Sorcerer's Apprentice on mallets and a variety of cymbal clashes.

If the orchestra is lucky, it may have chosen a handful of particularly impressive candidates to join those players invited directly to the main audition.

At this point, German federal law requires those not accepted into the main audition to proceed to get hideously drunk together, complaining wildly about the fact that the whole business is totally fixed and that the section of this orchestra are all utter w****** anyway.


Here is an item for our Spanish readers. At a performance of Handel's Messiah in Madrid, conductor William Christie had an audience member thrown out when his cellphone rang during the aria "He was despised." Here is a Google translation, edited by me for clarity:

At the end of the first part of the concert, during the aria "He was despised" in which is sung: "was despised and rejected by men," sung by the countertenor Carlo Vistoli, rang a phone mobile from a seat practically by the stage where the Orchestra is located. It was not the first time that it happened and Christie ordered his musicians to stop and said "You have just ruined one of the most beautiful arias in one of the most beautiful works ever written." The audience member left the room after his exclamation of "Get out!".


Katherine Needleman, principle oboe of the Baltimore Symphony, gives us a demonstration of the latest in wind instrument extended multiphonic techniques, using Jingle Bells. Follow the link to Slipped Disc. 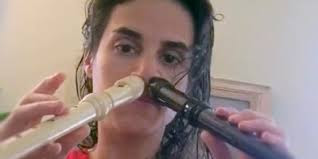 Credit where credit is due: Alex Ross has a fine article at the New Yorker on Bach's Holy Dread:

What went through the minds of the congregation at the Nikolaikirche, in Leipzig, on Good Friday, 1724, when the St. John Passion had its first performance? A year earlier, Johann Sebastian Bach, aged thirty-nine, had taken up posts as the cantor of the St. Thomas School and the director of music for Leipzig’s Lutheran churches. He had already acquired a reputation for being difficult, for using “curious variations” and “strange tones.” More than a few of his works begin with gestures that inspire awe and fear. Several pieces from his years as an organ virtuoso practice a kind of sonic terrorism. The Fantasia and Fugue in G Minor feasts on dissonance with almost diabolical glee, perpetrating one of the most violent harmonies of the pre-Wagnerian era: a chord in which a D clashes with both a C-sharp and an E-flat, resulting in a full-throated acoustical scream.

In the St. John Passion, Bach’s art of holy dread assumes unprecedented dimensions. The almost outlandish thing about “Herr, unser Herrscher” is that it does not simply take the point of view of the mourners and the mockers. It also adopts the perspective of the man on the Cross, gazing up and down.


Terry Teachout in the Wall Street Journal has a nice article about a new project by Daniel Barenboim on YouTube. Little five-minute videos about classical music that look to be an excellent way of sparking interest in people of all ages:

Mr. Barenboim is onto something here—something with much wider potential applicability, not just to classical music but throughout the world of art. What if (say) Tom Stoppard did a “Five Minutes On…” YouTube series about his best-known plays? Or Martin Scorsese did a series about classic films of the 20th century? You wouldn’t have to publicize such a venture, either. Once the word got out that it was up on YouTube, or available in podcast form, I have no doubt that “Martin Scorsese: Five Minutes on ‘Citizen Kane’” would go viral.


Scientists at Stanford have been engaged in an interesting project: recreating the acoustics of the Hagia Sophia in Istanbul (originally built as a Byzantine cathedral in the 6th century and for a thousand years the world's largest church). There aren't many details in this report, but it seems they made use of recordings made in the space:

The “Icons of Sound” project focuses on the interior of Hagia Sophia, using recordings of balloon pops taken in the space and other audio and visual research to  figure out the building’s acoustics by extrapolating from those noises. The scientists used that data to recreate the experience of being there

I wonder if there might not be another way to experience the acoustics of the Hagia Sophia? Couldn't we just schedule some concerts and recording sessions there? You say we can't? How come?

Our envoi today has to be that disturbing chorus from the St. John Passion, "Herr, unser Herrscher."

Posted by Bryan Townsend at 8:14 AM

That music is so timeless. As is often said of Plato, one wonders if all of Western music isn't just a long footnote to Bach.