I am sorry to have missed a few days. I think that in blogging it is pretty important to post every day if you can. I can't claim to have been super busy. Actually, I have had more spare time than usual and I have taken advantage of it to play guitar more regularly (I just re-learned the Nocturno by Moreno Torroba--a lovely piece) and to start a couple of new pieces, one for orchestra and the other for multiple guitars. Listening-wise, I just finished listening to the box of all the Mozart symphonies by Trevor Pinnock and The English Concert. Good stuff! On the strength of that I ordered their recording of the Haydn "Sturm und Drang" symphonies.

So while I have not been entirely dormant, there have not come up a lot of ideas that would make for good blog posts. I suppose I could write something about the interesting differences between Haydn and Mozart symphonies:


The thing is that these observations don't add up to anything very earth-shaking...

I am good friends with a violinist and we like to play together, but the problem is that there really isn't anything to play! I wrote four pieces for violin and guitar to fill the gap a bit, but we have played them dozens of times. There are a lot of pieces for violin and guitar by Giuliani, Carulli and others in the early 19th century, but frankly they are musically dull. At the same time, the guitar parts are all too technically challenging. So, for me, they are hardly worth the trouble. There are also some short sonatas by Paganini for violin and guitar, but in that case, it is the violin part that is so outrageously virtuosic that again, one wonders if they are worth the trouble. There just doesn't seem to be much good music for violin and guitar that is suitable for an afternoon of music-making. So I set out to rectify this a tiny bit by seeing if there are any movements in the Mozart sonatas for violin and piano that might be transcribable. Turns out that the Andante cantabile from K. 306 looks like it will work: 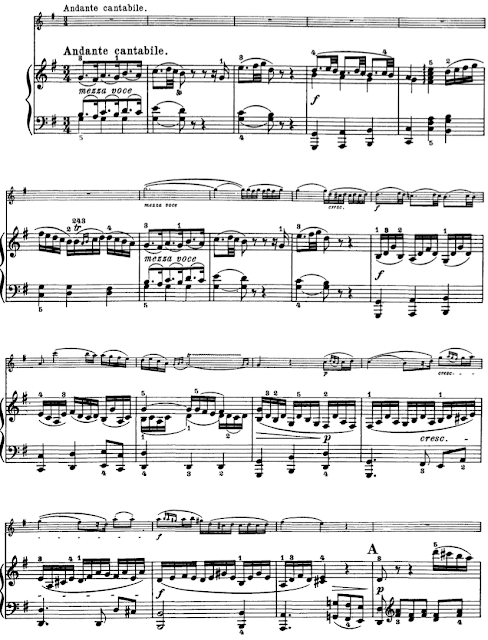 I'm not quite finished, but the first section, at least, works pretty well: 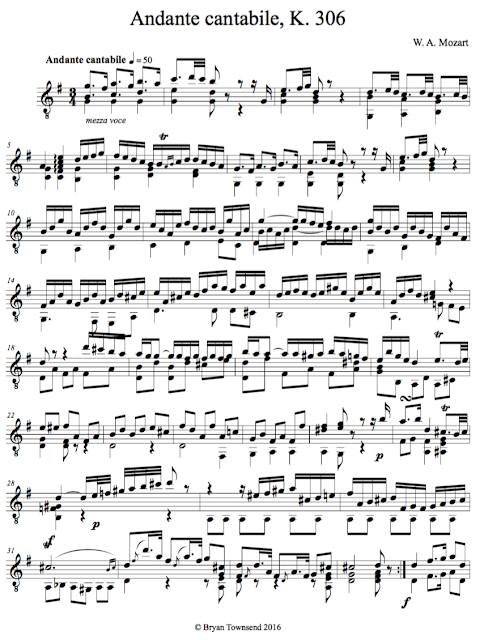 That is just the piano part, arranged for guitar. It mostly works, though I had to make some minor changes. The idea is not just to find a way of playing it on guitar, but to make it comfortable to play. Sometimes you have to move notes around to different octaves and in a few places, the texture has to be thinned out a bit. But it mostly works pretty well. It is not finished yet--what you see is just an approximation of the final arrangement.

So that's what I've been up to.

For an envoi, we could listen to the Mozart sonata in the original version. This is the whole sonata with Sigiswald Kuijken, violin and Luc Devos, fortepiano:

Bryan, your comment about the discipline of posting to a blog every day reveals an occupational hazard of the job: it is like being a dairy farmer - hard to take a holiday (hiatus) when the cows need milking every day.

From the perspective of the blog readers, a steady diet of new entries is habit forming, like snack food in the afternoon. (Of course your material is much better for us than the junk food available from some sources. -cough-s*disc-cough).

The object of my comment is to encourage you to take a break when it is needed. Your loyal readers will benefit from a blog diet full of musical vitamins, fiber and protein.

Yes, exactly! But I don't want to post something just for the sake of posting. I think it should be something worth putting up-- and reading! Now if this were a political blog I could just write something about Donald Trump every day...