If this is Tuesday, this must be Belgium, goes the old joke about package tours of Europe. Actually, Belgium was last Tuesday when I talked about the Vieuxtemps Violin Concerto No. 5. This week we are in Norway, well, Denmark to be more precise, where the 24-year-old composer wrote this very popular concerto when on holiday from his native Norway. The year was 1868, nine years after the Vieuxtemps. This is the only concerto Grieg wrote and it is one of the most popular piano concertos. Arthur Rubinstein relates in his autobiography that at a fairly young age he memorized the whole concerto in eight hours!

If you will recall, I mentioned in my discussion of the Schumann Piano Concerto that one of its innovations, the big, forte chords hammered out by the solo piano at the very beginning, was very influential on later composers. It is rare to find a popular 19th century piano concerto that does not begin with a similar gesture--and it is almost never found in pre-19th century concertos. Here is how the Grieg begins: 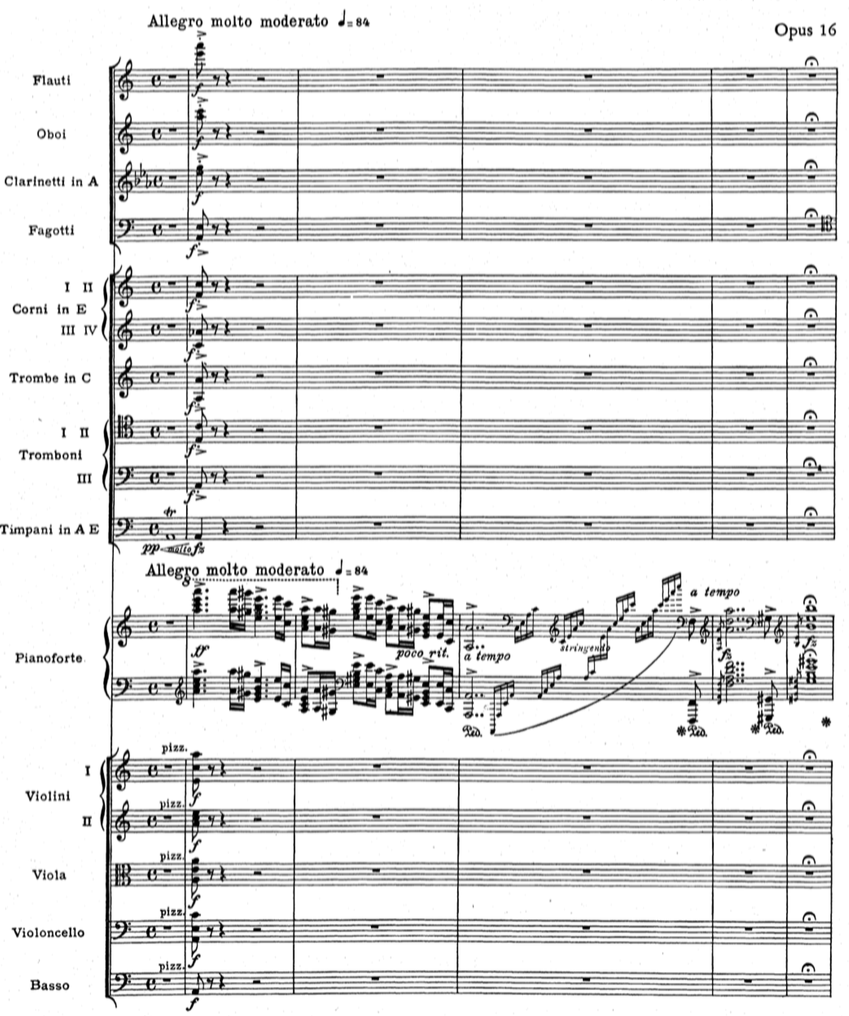 Compare to the Schumann opening: They are even in the same key. Of course the details are different. Schumann tonicizes several different keys: A minor, C major (with a secondary dominant to viiº7!), B flat, A minor, and D minor to mention a few. The Grieg is actually much simpler, harmonically, with that stirring gesture only involving two harmonies: V and i. Grieg does add one interesting touch: the piece actually begins with a tympani roll that crescendos into that opening orchestral chord. Here is the main theme of the first movement, as it appears in the piano quite early in the movement:

This is more akin to a motif than a theme: two measures repeated at a different pitch and that's it. Mind you, as Beethoven and Haydn have shown over and over, a brief, succinct motif is great material for a movement. Some of the strongest elements in the theme are the dotted rhythm and the syncopation in the second half of the first and third measures.

Grieg heard the Schumann concerto in either 1858 or 59 played by Clara Schumann and was obviously influenced by it. Other influences seem to be Norwegian folk music, especially in the last movement. Here is the theme of that movement, often compared to the Halling, a Norwegian folk dance accompanied by fiddle:

There is a fine video of Rubinstein playing the concerto, the orchestra conducted by a young André Previn:


And for contrast, here is a recent performance by Khatia Buniatishvili:

Posted by Bryan Townsend at 9:26 AM

Didn't realize it was composed so early.

Anyways, are you going to cover Saint-Saens? I'm quite unfamiliar with his works but it turns out he composed 5 Piano Concertos, 3 Violin Concertos and 2 Cello Concertos. I'm in the progress of listening to all of his concertos.

Yes, I was thinking of doing a piece by Saint-Saëns next.