This is the second part of what is going to be a fairly long series of posts about the concerto. It is partly in emulation of the Guardian's symphony guide which we followed as it unfolded over the last year. I started with a post on the origins of the instrumental concerto last week and today's post will be on the first major concerto composer, Antonio Vivaldi (1678 - 1741). He may also be the most prolific concerto composer of all time as he composed over 500 concertos--that is, we have five hundred of his concertos, some 230 for violin, and it is certain that an unknown number have been lost. It was the discovery of the manuscripts for a few hundred of Vivaldi's concertos immediately after the end of WWII that was the spur for the revival of interest in Baroque music.

Vivaldi had an unusual career. He was music teacher at an important institution in Venice, an orphanage for girls, the Ospedale della Pietà. The girls were given vocational training in the form of instruction in music and achieved such a high level of virtuosity that they became one of the major tourist attractions in Venice. Vivaldi not only provided musical instruction in the violin, but also coached and conducted orchestras and choruses as well as playing the solo violin parts in many concertos. Oddly enough, the second most important solo instrument after the violin was the bassoon for which he wrote thirty-seven concertos. A good friend of mine studied bassoon at the Curtis Institute and her professor had her learn a new bassoon concerto by Vivaldi every week! Here is the Concerto for Bassoon in C major, RV 477, first movement:


In Corelli we saw how the fundamental structures of tonality were developed: the idea of structuring harmonic movement using the circle of fifths (follow the link for the Wikipedia discussion) and the use of melodic sequences leading to a cadence. It was Vivaldi who exploited and perfected these methods in creating the basic model of the Baroque concerto. There are three movements in all: fast, slow, fast (which may have come from the sonata da chiesa, slow-fast-slow-fast by simply dropping the first movement). The first movement is structured by alternating ritornelli and episodes. A ritornello is a theme with a number of distinct sections, that leads to a concluding cadence. As the movement proceeds this ritornello returns in parts on different scale degrees. The first and last iterations are complete and on the tonic. In between the solo instrument provides variations and developments of motifs from the theme. All musical forms are essentially ways of handling the two basic devices of repetition and contrast and the Baroque concerto form is a particularly successful way of doing so.

Here is the twelve measure ritornello to the bassoon concerto. Each of the four motifs is marked with a letter: A, B, C, D: 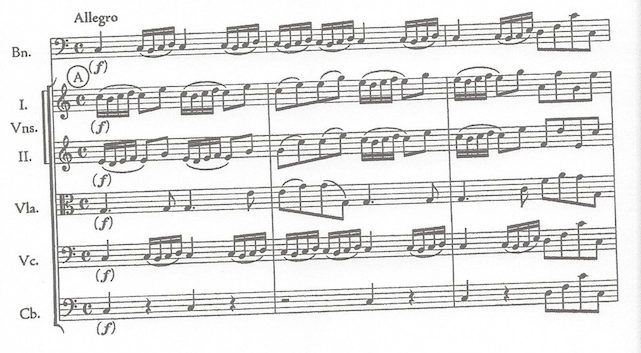 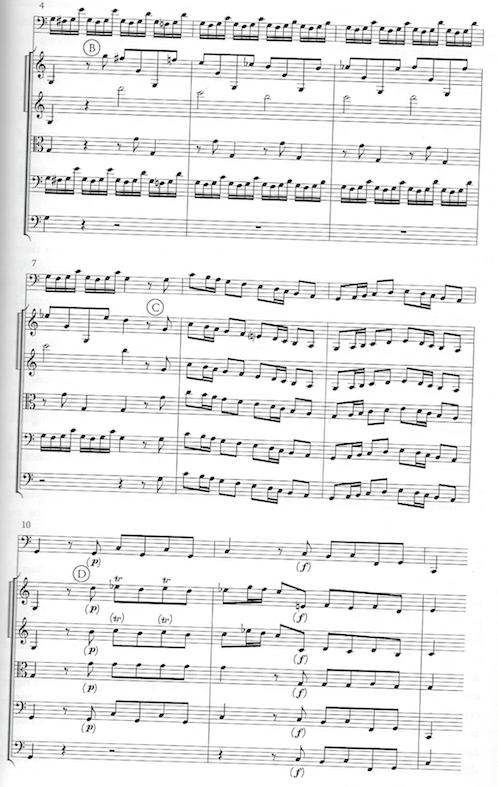 Sorry for the askew scans! That's what happens when you jam a big volume into the scanner. The line to follow is the not the bassoon line, which in the ritornello is just accompanying. The line to watch is the first violin, who has the theme. The four elements of this theme are A, a rising turn figure, B, an arpeggiated chromatic descent, C a descending scale in octaves and D, a cadential figure. As always, it is surprising to many how very simple the building blocks of a successful composition are.

In between statements, whole or part, of this theme, are the solo episodes of the bassoon who, in the words of J. J. Quantz, "dismembers and intermingles" the motifs of the theme. Now go back and listen to the movement again. As you can hear, the bassoon builds its solos from variations on the motifs. Also, listen to how the first ritornello abbreviates the theme.

The Baroque concerto is an extremely successful form as indicated by the fact that one set of concertos by Vivaldi, the Four Seasons, is one of the most popular pieces of classical music today. There are some other interesting aspects of the form. There is the soloist, who never repeats anything, and the orchestra, who always repeat. This has been mapped onto social structure with the soloist, of course, representing the individual and the orchestra, the group. The interactions of the two are coordinated, but also competitive.

The second movement owes its structure to aria form from opera seria where the soloist spins out expressive melodies over a minimal accompaniment. Then the third movement returns to the ritornello form.

I mentioned that the Four Seasons, a set of four concertos representing Spring, Summer, Fall and Winter, are hugely popular with audiences. Vivaldi appends a poem to the beginning of each movement describing what is about to be heard. Since these concertos are not actually better music than other sets by Vivaldi, I suspect that this little "cheat-sheet" and program music aspect is part of the appeal. Most listeners benefit from some kind of simple doorway into a piece of music, a story they can relate to. Here is a performance of the four concertos for solo violin and orchestra:


But my favorite set of Vivaldi concertos is one even more influential in music history, L'estro armonico (Harmonic Inspiration) a set of twelve concertos for one, two, three and four violins that were an inspiration to J. S. Bach who recomposed six of them for keyboard instruments, in the process inventing the keyboard concerto. Here are all twelve concertos on original instruments:


It must be admitted that Vivaldi, in exploring all the possibilities of the concerto, was prodigiously creative and those people who say he wrote the same concerto five hundred times are just, well, wrong! I myself have not been the biggest Vivaldi fan, but just the process of preparing this post has converted me. What Bach probably derived from Vivaldi was a rhythmic crispness and harmonic clarity that he combined with the elegance of French Baroque music and the contrapuntal density of German music to create the most profound synthesis in music history.
Posted by Bryan Townsend at 9:53 AM

So, will you cover one composer per post? And one per week during a year? That would be over 50 composers, hmm. Or will it be the more important ones? I'm curious about the extent of this.

Anyways, good to hear you changed your mind about Vivaldi. Interesting analysis. "What Bach probably derived from Vivaldi was a rhythmic crispness and harmonic clarity that he combined with the elegance of French Baroque music and the contrapuntal density of German music to create the most profound synthesis in music history." That is a very interesting observation.

Thanks for the compliment!

Apart from the general plan of looking at 50 concertos and doing so in historical sequence, I haven't decided on the details. I don't think I will cover fifty different composers because I am not sure that there are fifty concerto composers worth the attention. And I will certainly cover more than one concerto by some composers. For example, Mozart wrote so many great concertos that I am likely to do at least two or three by him. Other composers that will get more than one post would be Beethoven, Bach, and maybe Shostakovich because they wrote a number of very interesting concertos for different instruments.

Bryan, like many of your readers, I am very much looking forward to your ambitious Concerto series. There is much music to be discovered in this vein beyond the established piano and violin "war horses" that crowd the concert hall schedules.

Just looking at the list of 23 names brings home to me the gigantic size of your undertaking and confirms the value of your work on the road ahead to your readers. I think the motto of the RCAF could be applied to your project: "per ardua, ad astra".

Best of Luck. I look forward to following your posts.

Not that yours falls into either category, but presumptuous and pedantic comments are both welcome here at the Music Salon. Very interesting list, only a couple of whom were on my radar. I will certainly do more than one post on CPE Bach concertos, and I had mulled over Stamitz and Boccherini and Vieuxtemps, but most of the rest had not occurred to me. Many thanks, David!!