A Problem in Music Economics

I was reading an article in the Wall Street Journal the other day about very expensive hotel rooms. I mean, ones that cost $10,000, $20,000, $30,000 or even $40,000 a night! There are lot of hotels in places like London, Paris and Dubai that are competing for the ultra-rich's travel dollar. This is a kind of economic context in which the visual arts can also flourish. Damian Hirst's jewel-encrusted skull titled For the Love of God would seem to appeal to the same sort of clientele: 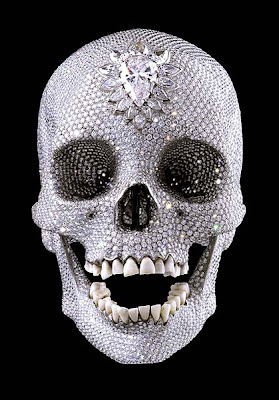 There are reported to be £15,000,000 worth of diamonds used in the piece. The problem for musicians is that we don't seem to be able to do anything similar to appeal to the fraction of a percent that are so wealthy that they can afford to stay in $40,000 a night hotel rooms and buy jewel-encrusted skulls. Even the car industry has been able to respond by building tiny numbers of million-dollar sports cars like the Aston Martin One-77 which goes for $1,400,000: 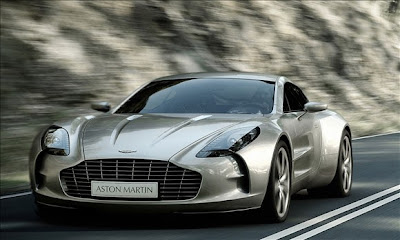 What can musicians do? There was some real money when you could restrict performances to just those people who could buy tickets. And you could sell them expensive and exclusive box seats. In the 19th century the opera-composer Rossini was able to retire, a wealthy man, at thirty-seven years of age based on this sort of model and being the most famous opera composer in Europe. But in the digital age, when it costs nothing to reproduce virtually any performance, few musicians are able to earn large amounts of money and those few are all pop musicians who leverage their earning power by selling headphones, perfumes, t-shirts and other products.

What can a musician create to sell to the fabulously wealthy? We just can't seem to think of anything! While certain music in the past was often the preserve of the wealthy, now that doesn't seem possible. Joseph Haydn was employed for most of his career by the Esterházy family who had a country estate modeled after Versailles that included concert halls and their own private opera house. Haydn wrote symphonies, chamber music and operas just for performance at their residence! I suppose someone like Bill Gates could do the same today, but there seems to be no interest in doing so. The closest equivalent would be the museum in Seattle built by Paul Allen, co-founder of Microsoft in 2000. The disconcerting thing is that it was originally devoted to the music of Jimi Hendrix, a Seattle native.


The problem with music is that all its virtues are non-material. The idea of having an orchestra playing all Stradivarius instruments, in a concert hall designed to the height of luxury, with, I don't know, champagne and caviar in every box, the musician's music stands being of solid gold or something and everyone, conductor included, wearing the height of fashion designed by Jean-Paul Gaultier is, what, ridiculous? Absurd?

The fact that music is so non-material in an age that is so deeply material is its strongest virtue...

Posted by Bryan Townsend at 2:42 PM

"The fact that music is so non-material in an age that is so deeply material is its strongest virtue..." Very well said. Speaking of money and patronage: Kalevi Aho (according to Wikipedia at least) has a state scholarship since 1993. I can imagine it's not a lot of money per month but that's way better than most composers nowadays can hope for.

A small group of noblemen got together and guaranteed a stipend for Beethoven in Vienna to keep him from leaving to take up a post elsewhere. I wrote a whole post about the economics of music composition:

A very few composers, like Philip Glass, can actually live off compositions and performances, I think. The rest have to either be employed by a university or supported by the state. Some composers make a living writing music for films.

Oh I see, support by the state seems to be more common than I thought then. How much does a composer with state support in Canada earn (when compared with other professions)?

I don't think that the government of Canada directly supports composers. They do fund the Canada Council, which commissions music, though. I talked about that and even posted the rates here:

Your best bet is to get a position at a university teaching composition.

I'm not sure there is much data available comparing what composers make compared with other professions... "Not much" is probably the best answer.