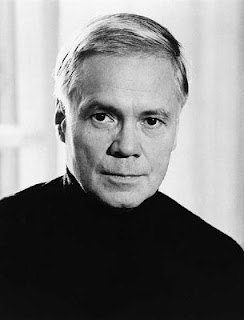 I cannot write a personal memoir of this great - truly great - singer and musician who passed away just a few days ago, on May 18. I never met him personally and only saw him in concert on one occasion in Montreal where he gave a Brahms recital in the biggest hall in town. But he has been a presence in my whole life in music. From the earliest days of my discovery of classical music, at the very beginning of the 1970s, I became aware of him. At that time his complete recording of all - ALL - the Schubert lieder accompanied by Gerald Moore was in progress. That amounts to about six hundred songs. Fischer-Dieskau is probably the most-recorded singer of all time. Whole books are devoted to merely listing his recordings.

When I was a young classical musician I looked for models. As a guitarist my models, certainly in terms of virtuosity, which was a big concern of mine at the time, included Andres Segovia, John Williams and Julian Bream. But alongside them and the guitar repertoire I always listened to and greatly respected the wider repertoire. There were a handful of artists that commanded my attention due to their immense musical authority. What is musical authority? It is a bit like moral authority, I think. One of the finest examples I can recall was that concert I saw of Fischer-Dieskau. It was in Place des Arts in Montreal, in the big hall which seated, oh, at least 2,000. Big place for a lieder recital. It was packed to the ceiling. At 8 pm Fischer-Dieskau strode on stage, took his place in the center and began acknowledging the applause. His accompanist, whose name I forget, scurried after him and quickly took his seat at the piano, his fingers curled over the keys and his eyes on Fischer-Dieskau. I wondered at this seeming excessive anxiety. The applause was loud and long, but the moment it showed a sign of slacking, Fischer-Dieskau nodded at the pianist and launched into the first song. He was there to sing, not to bask in applause. This is the kind of authority he had: it came right from the music and that is why it is unmistakable. He, his ego, isn't there, it is instead the aesthetic authority of the music that commands both him and us as listeners.

This is why a great artist like Fischer-Dieskau cannot sing trivial music. That would render the whole exercise meaningless. I see a looming contradiction here for all young artists: they are being told more and more that they have to 'brand' themselves, work out the tricks of marketing, make a name, sell themselves and so on. But the horror of that is that it directly drains away the musical authority that comes from NOT doing those things, from allowing yourself to be the servant of the music instead of merely using the music to further your career ambitions. The music is where your real authority comes from, not from whatever little personal quirk you think you can spin into media attention.

When I was a young classical musician, still learning my trade, the artists who stood out, whose musical authority was evident were few: Dietrich Fischer-Dieskau, Gustav Leonhardt (who also just passed away and whom I wrote about here), Arthur Rubinstein, and the Guarneri Quartet. The only artist with this kind of stature or authority that I have added in recent years is the great Russian pianist Grigory Sokolov whom I wrote about here. I'm leaving out other artists such as Mstislav Rostropovich, the great Russian cellist, only because I wasn't as aware of them. Let us end with two pieces performed by Dietrich Fischer-Dieskau. The first is the last song of Schubert's Die Winterreise:


The second is the first movement of Shostakovich's 14th Symphony on a text by Garcia Lorca.


A fascinating anecdote about Fischer-Dieskau comes from his very early career. During WWII he was drafted into the Wehrmacht and spent his time tending horses on the Russian front. Captured by the Allies in 1945 he was held as a prisoner of war until 1947--one of the last to be released because they toured him around to various camps to sing lieder to homesick German prisoners...
Posted by Bryan Townsend at 10:12 AM

There are some profound ideas in there! The concept of musical authority and its basis in non-egoism (humility) deserve development.

I'm not sure how to go much further than I did. I'm not really a theoretical thinker, more of an observer. I'm afraid of running into apparent ironies, such as the humility that great performers genuinely have co-exists with their knowledge of their surpassing abilities and the inability to suffer fools gladly!

Still, the difference between the kind of artist who is capering and striving for our attention (and dollars) using whatever means necessary, and an artist like Fischer-Dieskau who is there to bring the music to us in all its depth--that difference is palpable...