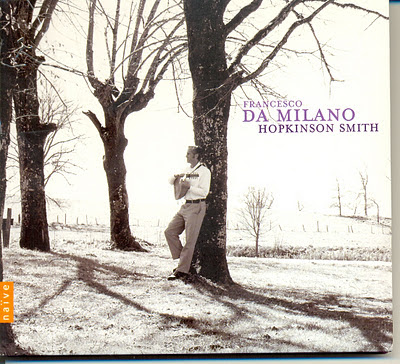 My instrument is the classical guitar, but I spent one summer studying the lute--for which I had to cut off my nails. It was a fascinating exercise and, while I wasn't tempted to change instruments, it gave me great respect for the lute and its repertoire. The lute was the domestic instrument for solo music before the keyboard came to the fore. Capable of music in two, three, four or even occasionally five voices, it attracted many great composer/performers. The two greatest of these were John Dowland, whose music I have briefly mentioned here and there, and the Italian Francesco da Milano, lutenist to three popes and referred to as "il divino". The very fine lutenist Hopkinson Smith recorded an album of Milano fairly recently that I have just been listening to.

I don't normally do reviews of recordings and this won't be one either, but it does provide the occasion to talk about this kind of music. There were two basic models for composition in the 16th century (and even later). These are the voice and the dance. Vocal music gives a model for not only melody, but also counterpoint. The dance provides dynamic rhythmic structures. Of course, you can always synthesize the two, but most pieces lean one way or the other. On the CD, Hopkinson Smith acknowledges this by interspersing mostly anonymous dances between the contrapuntal fantasias and ricercari of Milano. He also plays a chanson by Jean Richafort, "De mon triste" and follows it with the fantasia based on the same theme by Milano.

On the lute, two or three voices are fairly easy to sustain, but keeping a continuous flow of more than that is very difficult as the lute tends to suggest different voices rather than follow strict part-writing. Let me provide an example. I have done a transcription of "De mon triste". There are different sources and mine varies from Hopkinson Smith's, however they are basically the same. On the CD this is track 13. Here is my score (transcribed for guitar, which puts it a third below the lute pitch):

This is well-orchestrated for the lute. Take the opening: the second bar repeats the outer voices while filling in a quicker moving inner voice. Keeping in the same range, the voices are varied with each recurrence and little cells like the scale segment E to A keep coming back. But no two measures are the same. This music is like a kaleidoscope as the same patterns return, but always in different relationships.

At this time, lute music was not written in vocal score as above, but in tablature. The Germans, the French and the Italians all used different methods. Here is what Italian lute tablature looks like:

Tablature is very handy and makes reading easier on the lute as it shows you where to put your left hand fingers. Each line corresponds to a string of the lute with the lowest line standing for the highest string and vice versa (in Italian tablature, the French is different). So this tablature is a bit like a mirror image of the lute as when you hold the lute to play, the highest sounding string is on the bottom. The numbers stand for the frets. '0' is an open string, '1' the first fret and so on. The problem with tablature, especially for composers like Milano, is that it does not record the duration of notes. If you look at measures 8-9 of my transcription of "De mon triste" you will see an example. In the tablature, there is no way of indicating that the G note on top is tied over into the next bar, moving down to F# and then E. Lutenists were told to just hold notes as long as you could. You can certainly hear that the G should sustain. Transcribing from tablature is an interesting exercise because you have to sort out the voice-leading and decide which note goes where.

Let's end with a selection from the CD. Here is Hopkinson Smith playing what he calls a "reconstruction", that is, a piece in dance style based on theme from a fantasia. The justification is that Milano is reported to have been a great improviser and undoubtedly improvised pieces much like this.

Posted by Bryan Townsend at 4:16 PM