Leading off this week is the Wall Street Journal with an article deceptively titled "Julliard Students Photographed in Their Element." Yes, these are, I assume, Julliard students and they seem to be photographed on-site, but the deception is that this is actually a fashion shoot! The WSJ does this from time to time: goes to a particular company or institution and builds a fashion shoot around the people. Here, see what I mean: 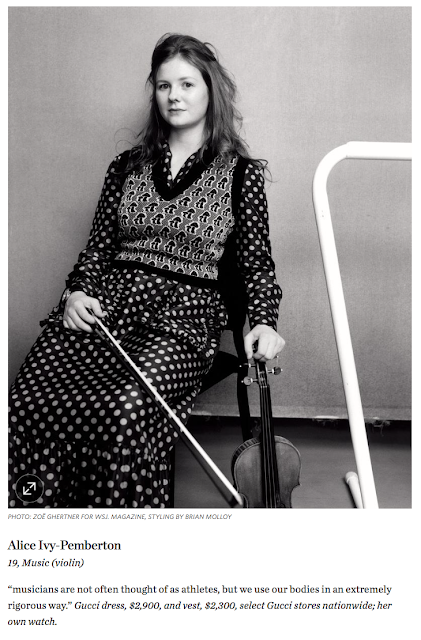 It's about the pose, the clothing (she is wearing over $5000 worth!), the hair, the makeup. Now, there is nothing wrong with that. I'm all in favor of nice clothes. But doesn't it say something that while the WSJ would run a piece like this, it is less likely they would run one talking much about what these students actually do at Julliard?

This is the silliest music-related story so far this year: UK Violist Sets World Record For Fastest Runner Dressed as a Musical Instrument:


A little follow-up on the piece on how learning how to read music is elitist. The Guardian has published the protest letter signed by six hundred musicians:

Gill’s comments about “limited repertoires of old, mostly classical music” are unfounded and presented without evidence: composing, listening, singing and playing are embedded in much musical education, which also widely encompasses jazz, popular and non-western traditions. Claiming that classical music comprises a limited repertory is inaccurate: composers have been adding to its repertory for centuries and continue to do so. We agree with Gill that aural and other skills are just as important as those in notation. However, through her romanticisation of illiteracy, Gill’s position could serve to make literate musical education even more exclusive through being marginalised yet further in state schools.

My feeling is that illiteracy is illiteracy, though, of course there are a lot of genres where it is only of small importance. My mother, an "old-time" fiddler, never read a note of music, but was an accomplished musician in her field.

Slipped Disc alerts us to the dumbing down of music at Harvard. Details from the Harvard Crimson:


Believe it or not, there is a Don Rickles (who just passed away) clip with a classical music theme. Here is an excerpt from The Tonight Show with Johnny Carson interviewing Frank Sinatra. He poses the intriguing musical question, "Frank, when you are in a romantic mood, and you're trying to make out, whose records do you put on?" The answer he gives is Daphnis and Chloe by Ravel and The Sunken Cathedral by Debussy. So, Frank leans towards the impressionists. I didn't know that. Then Don Rickles comes out and steals the show by making a bunch of Mafia jokes:

There are a lot of interesting things in this interview with Iranian harpsichordist Mahan Esfahani. Here is a sample:

MOST PEOPLE SEE THE EARLY MUSIC MOVEMENT AS HAVING A LOT OF PROGRESSIVES IN ITS RANKS FROM THE 1960S ONWARDS.

Sure, you get videos and pictures of shoeless Dutch musicians standing around without a conductor. But this isn’t a form of activism or even iconoclasm if the people on stage have set up a scheme of exclusion. It’s play politics, like many trends of the 1960s. One of my favorite quotes by composer Morton Feldman is “Pop Art is Socialist Realism for white people.”

Our musical envoi for today is the ballet Daphnis et Chloé by Ravel with, of course, Charles Dutoit and, of course, the Montreal Symphony Orchestra and Chorus.

Posted by Bryan Townsend at 7:29 AM