Emancipation of the Dissonance?

Schoenberg's famous "emancipation of the dissonance" is one of the fundamental concepts in the history of harmony in the 20th century. If you go look at the Wikipedia article you will see the standard narrative. The history of harmony is the progressive acceptance of more dissonant intervals. From the perfect fourths and fifths of organum we move to the acceptance of the third in the High Middle Ages, progressing to the acceptance of the 7th and 9th, eventually arriving at the pinnacle of total chromaticism as advocated by Schoenberg and his pupils. Their 12-tone method is a way of systematizing the thorough use of all the chromatic tones.

The Wikipedia article is remarkably short for such a weighty and historically important concept, though, isn't it? This might be because there are a few problems with the whole idea. The two most significant ones are, first, that it is based on a misunderstanding of musical structure. As every harmony text informs us, the development of every new harmony in music history came about as a result of voice-leading! The harmonic series, though beloved of some theorists, actually had little to do with it. The third came about through a descent from the fifth to the tonic. The seventh in diatonic harmony is NOT an accepted dissonance, but a voice moving to the third of the tonic. Voice-leading demands that it resolve. The augmented sixth chords came about by means of a chromatic progression within a Phrygian cadence. Here is the relevant section from Aldwell and Schachter's Harmony and Voice-Leading: 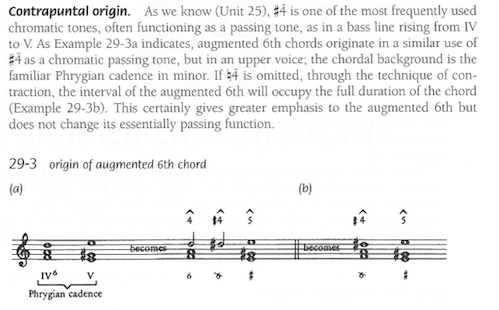 You cannot understand harmony without understanding voice-leading, hence the title of the text. Using the harmonic series as a justification for more and more harmonic richness is just bizarre. Harmonic richness comes from voice-leading, that is, the conduct of the separate voices is what both creates and resolves dissonances. Trying to connect this with the harmonic series is just theoretical mumbo-jumbo. What was really going on in the early decades of the 20th century can be seen from a lot of different perspectives. But the one perspective we need to be particularly wary of is the one sold to us by the composers arguing for it: chromatic harmony as "emancipation of the dissonance." As I have talked about here, much of the aesthetic ideology of modernism is really disguised marketing. Such is the case here.

This brings us to the second problem with this concept: it is only a metaphor and a flawed one at that! Chromatic harmonies are not "emancipated" from anything! Emancipation is the granting of rights to previously disenfranchised groups of people. It is a moral concept having nothing to do with music. But it was a useful metaphor as it made dissonance seem moral, healthy and, most of all, historically inevitable. Once all the intervals were emancipated, around the time of the First World War, then the pinnacle of music history had been reached--as far as harmony is concerned. So what has happened since?

Alas, history has not cooperated with the emancipators. If you view harmony from the point of view of emancipating all the intervals, like so many slaves of the lords of tonality, then there really is nowhere else to go. Sure, for a while composers tried serializing everything they could think of, but this didn't last long and audiences didn't care much for it. So now we are in a post-historical phase where, surprise, surprise, consonance has been rediscovered.

Let's end with a couple of pieces. First, Structures for two pianos by Pierre Boulez, an example of total serialization from 1952-61:


And second, the de-emancipated return to consonance of the music of Enojuhani Rautavaara. This is the Symphony No. 8 from 1999:


History moving backwards? Or just a bad metaphor?
Posted by Bryan Townsend at 9:05 AM

Wow, gorgeous symphony by Rautavaara! Thanks for sharing.

I'm just in the process of discovering his music.

"Alas, history has not cooperated with the emancipators." Indeed! Civil emancipation is one thing: throwing Western culture into the remainder bins in the name of the idol Progress is just the bloody recreation of barbarians. Look at... will stop before I really begin ranting; will have to think about your post, and figure out what voice-leading is, and emancipating intervals, and am, alas, not so sure about serialism and Arnold S., either, although one knows a bit superficially, enough not to make an ass of oneself over drinks. :-) I think, as I begin to take this business of understanding what I listen to more seriously, that I need to look about for a good book or two about the basics....

While I listened to five minutes of the Rautavaara from the other day, didn't pay much attention but looked today: symphonies, concerti, songs, 'Thomas', an opera? The 8th this afternoon.

Every now and then I write what I think is a brilliant post about one of the big misunderstandings of music history---and then I find out that a lot of readers aren't familiar with the context!! I will do another post today on that.

But in the meantime, harmony developed through voice-leading. You have a bunch of monks singing some single-line chant. When they get bored, some of the monks start moving away from the other ones and we get two separate voices. At first they just did very pure intervals like fourths and fifths (from C to F or C to G), but others started creeping in. As time went on more voices were added until there were three or four separate ones. Other intervals became more common like thirds and sixths. That is a very brief summary of a few hundred years of the history of harmony, but it might clarify a couple of things! Voice-leading is just the way separate voices interact.