I have been reading a book by the German musicologist Carl Dahlhaus, Esthetics of Music, (in German,  Musikästhetik). A lot of it seems to suffer from philosophical navel-gazing, but this is often the feeling I get from things translated from the German! But I think I have come to one small realization. Philosophers who talk about the aesthetics of music often seem to get all twisted up in their own language.

For example, my title is a quote from a book by Theodor Vischer, Äesthetic oder Wissenschaft des Schönen, published in 1840 - 1857. The title translates as Aesthetics or the Science of Beauty. I think I can see the problem just from the title. Why would you think that beauty could be reduced to scientific understanding? Well, of course an awful lot of people seem to be trying to do just that with MRI machines and statistics these days, but at least they have some scientific tools they are using. Poor Theodor Vischer seems to be trying to unscrew the inscrutable just with philosophical reasoning. And what does he come up with? Statements like this, from which my title is taken: "Music is the richest art: it expresses inmost things, utters the unutterable; yet it is the poorest art, says nothing."

I submit that if your method results in you coming up with statements like that, then your method is absurd! Music is a rich art indeed, that is rather a truism. So why do we think so? Certainly not because it utters the unutterable because that is simply a linguistic tangle. Music only "utters" or speaks in a literal sense when there are sung words, lyrics. And it is the lyrics that utter, not the music. Instrumental music is about the unutterable because it doesn't utter. It "musics". That is, it sounds melodies, rhythms and harmonies. That's what it does instead of uttering anything. Yes, music does indeed express, sometimes at least, "inmost things" but that is because those melodies, rhythms and harmonies resonate with us in expressive ways. How does that work? About the only way I know how to describe it is to say that, as a composer, when I find a particular melody, harmony or rhythm that resonates with me, that I respond to, that I find expressive, then I put it into a piece of music in hopes that other people will also respond to it. That is what we all do, I think, and it seems to work. If you want specifics, you have to talk about particular places in particular pieces.

I think this is where the philosophers fall apart, because this is precisely what they seem reluctant to do: to refer to specific musical examples. As Dahlhaus says:


[Eduard Hanslick] argued that the searching for the motivations of the forms of musical works in emotions adhering to them, or hidden in them, was fruitless. For forms, according to Hanslick, are always precise, firmly bounded, and concrete, whereas emotions remain vague, indefinite and abstract if they lack concepts and objects, yet such vague emotions are the only ones accessible to music. And from hazy generality nothing distinctly individual can be derived. [Dahlhaus, op. cit. p. 50]

By "forms" he means, musical forms or structures. Musical structures are extremely precise as we can see from their notation: 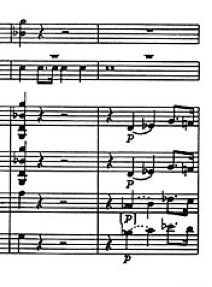 That is, if you know how to read it, a precise musical structure. But can't emotions also be pretty definite? We all know the feeling of annoyance we feel when the phone rings, we pick it up and say "hello" and immediately they hang up. Or the sinking feeling you get when you realize you don't have enough money to pay the bills for the month. And so on. All these and other emotions like love and hate, have objects. That is, they are inspired by and related to events, objects and persons in the real world. The expressive moods of music are not emotions at all, in this sense, because they have no objects. They are precise sound structures that generate expressive responses, but they just don't correspond to garden-variety emotions. And why should they?

So I am rather puzzled that philosophers seem to get themselves so tangled up over the aesthetics of music because all they really have to do is look at actual music and see how it is put together and how people react to it. This is the empirical data you need to start forming a theory of aesthetics. Some contemporary philosophers like Peter Kivy seem to be pretty good at doing this, but a lot of the historical texts on aesthetics go wildly astray in my opinion.

Let's listen to some music to end with. How about the piece that my example comes from? This is the Symphony No. 47 by Joseph Haydn:

Posted by Bryan Townsend at 1:16 PM

In German, Wissenschaft means more than science. For example, it includes the humanities.

Bach called his work "musicalische Wissenschaft" and compared himself to Newton. In fact, he didn't think of himself as an artist but as a scientist.

Final point: music raises all sorts of interesting philosophical points. Why does it move us so deeply? Just to say "it resonates with me and I hope others will respond to it" is to beg the question. Why does it resonate with you? Bach saw universal principles there similar to the stars. Do you?

Great post- you make some interesting points- music does convey moods and emotions- it can evoke scenes for me, and I think other listeners too!

Yes, I know that Wissenschaft means more than just the English word "science" and includes the humanities. But the implication is that of rational investigation, which would also suit Bach. And yes, I know that music raises all sorts of interesting philosophical points. But before you can investigate them, you have to clear away a lot of irrelevant underbrush such as I was doing in this post.

When I said that I found a certain musical structure expressive and it resonated with me, that was in no way begging the question, but offering empirical evidence. And no, I see no universal principles there similar to the stars and I rather doubt that Bach quote. Source?