Busking, extemporaneous performance of music in public spaces, is probably the most precarious, least prestigious form of musical performance. When you walk onto a concert stage, even if the hall is only partly full, at least you know the people paid to hear you play. If you just go down to some public space, you never know what to expect.

Courtesy of Norman Lebrecht we have the story of one busker, a violinist, who went to court to win the right to busk in Ocean City, Maryland. Here is a sample of his playing:


In North America what you mostly hear on the streets are pop music buskers, scratching out a meager existence. But in Europe, at least when I was there, the scene was much more various. In Freiburg I heard a man declaiming avant-garde theater. In Paris, a small string chamber orchestra was playing Mozart in the La Bastille subway station. In Milan a young fellow was miming conducting an orchestra with recorded accompaniment. I have also heard a cellist play Britten and a violinist play Bach on the street in Montreal. And everywhere there was the ubiquitous Peruvian folk group with very loud drum and panpipes.

I know all this because I spent one fascinating summer busking with a flute player in Montreal and all over Europe: Paris, Strasbourg, Freiburg, Lucerne, Milan, Lucca, Verona, Siena, San Gimignano, Ferrara and Florence. Our repertoire was the greatest hits of classical music: Mozart, Puccini, Fauré, Beethoven, and so on. But the two biggest tunes were the slow movement of the Concierto de Aranjuez by Rodrigo and the anonymous Spanish Romance. I also played a few guitar solos like Asturias and Recuerdos de la Alhambra.

Florence was really the Mecca, at least for our kind of busking. We had the whole setup: our own generator, lights, amplifiers, stands, even a simple kind of formal costume: white shirts, black pants. And we had a show, or at least the flute-player did. But the tune that would really make people stop and listen was the Aranjuez. Here is the tune; just imagine it with flute and guitar:


Florence was ideal because every summer it is filled with the special kind of tourist that is attracted to culture. They were surrounded by great artworks and we provided the classical soundtrack. Every evening we ensconced ourselves in the Piazza Signoria next to the Uffizi gallery and played our music. Believe it or not, we could get up to five hundred people, all standing, transfixed by the music. How we made money was both by collecting change and by selling recordings: cassettes and CDs. Some nights we made over $1000 US. We were undoubtedly the most professional buskers in the area. We even had a permit from the Florence municipality which came in handy one night.

I was playing my solo, Recuerdos de la Alhambra, with a large, enraptured audience when a blue Carabinieri jeep nosed its way through the crowd and stopped right in front! Here is the music I was playing. UPDATE: I replaced Pepe Romero's performance with my own:


So, here comes the jeep, with revolving lights. I stop playing as a young woman Carabinieri gets out and tells us we can't be playing here. We tell her we have a permit and I get it out of my bag. She looks it over and says to the officer in charge, with some amazement, "they have a permit!" All being in order, they drive away to the boos of the crowd. So then we played some Verdi!


There was one thing I loved about busking: it was a very pure activity. You never had any doubt that every person standing there was doing so just because they wanted to hear you. And as soon as you played something boring, they would leave...

I don't have time right now, but later on I will put up some photos from this tour taken in Strasbourg.

UPDATE: As promised, some photos of the busking tour of Europe. Alas, no photos of the carabinieri (they probably would have shot the photographer!). All these were taken in Strasbourg, in front of the cathedral. First, from left to right, myself, a member of the audience who was helping us play the "Toy" Symphony and Robert O'Callaghan, the flute-player (and the fellow who had worked out, over many years, all the tricks of busking): 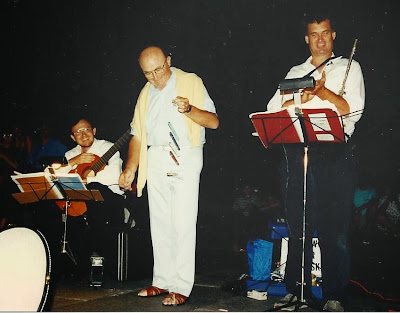 Posted by Bryan Townsend at 7:53 AM

Email ThisBlogThis!Share to TwitterShare to FacebookShare to Pinterest
Labels: busking