Starting on Oct. 1st I did a whole series of thirteen posts on Haydn symphonies starting with No. 2, written before he obtained his employment with Prince Esterházy, and ending with No. 82, "The Bear", commissioned by an organization in Paris, which was the beginning of his international fame. This brief jaunt through thirteen symphonies really just whetted my appetite so I paused to get my breath before taking another run at it.

The first step was to get the whole series on CD and there is a remarkably cheap and recent version available: 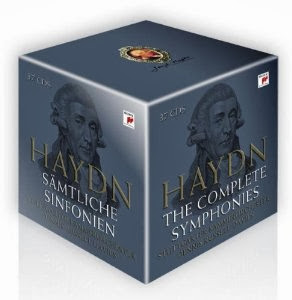 Here is the Amazon link. It is for sale for a mere $22.56, which, for 37 discs, seems ridiculously cheap! I may have gotten the last copy as it now says "temporarily out of stock". I have listened to about a quarter of the symphonies and am more fascinated than ever with what Haydn has done. Regarding the recording, it is certainly adequate. Not on period instruments (though it sounds sometimes as if they might be using natural horns), but the performances are easily good enough for my purposes, which is to study the music. The only irritant is that they include clapping after the last movement of every symphony! Just skip ahead to the next track.

So why do I say the "amazing" Mr. Haydn? Well, we always keep calling him the "father of the symphony" (which would make Mozart the mother?) and saying that he created not only the basic structure of the symphony and string quartet, but was instrumental in creating sonata form, possibly the most productive musical form ever. But the more I listen to his symphonies the more I feel that we are drastically under-rating Haydn!


My prince was content with all my works. I received approval for anything I did. As head of an orchestra, I could make experiments, observe what enhanced an effect, and what weakened it, thus improving, adding to it, taking away from it, and running risks. I was cut off from the world, there was nobody in my vicinity to make me unsure of myself or interfere with me in my course, and so I was forced to become original.

Imagine the situation: a young man of twenty-nine years, obtains a post as assistant (later full) kapellmeister in charge of the music of a very wealthy nobleman who loved music, played music and employed Haydn to write immense amounts of chamber music (quartets and trios), symphonies and operas. Haydn must have been one of the hardest-working musicians in history. I can't think of any musician today who has this kind of workload. He wrote sixty-eight string quartets, forty-five piano trios, fourteen operas, masses, oratorios and one hundred and eight symphonies. 108. One hundred and eight! This makes every other symphony composer look like a weekend amateur. Mozart? A mere forty-one, of which a couple were stolen from other composers. Beethoven? Nine. Brahms? Four. Mahler? Nine. Heck, Haydn had written fifteen symphonies before he even got his post with the Esterházy family. Think of it, before he was out of his twenties he had already written nearly twice as many symphonies as Beethoven.

Make no mistake, while Haydn's symphonies range between twelve and thirty some minutes long, shorter than later composers' works, they are extremely fine works. He was a great experimenter and in his symphonies we find many things that later composers used. I mentioned that Mozart stole a couple of symphonies? Took them, filed off the serial numbers, and in the case of Symphony No. 37, just wrote a new slow introduction and tinkered with the wind parts. The actual composer of that one was Michael Haydn, Joseph Haydn's younger brother.

We are all familiar, I hope, with one of the greatest of Mozart's symphonies, No. 41, often called the "Jupiter"? This has a stunning last movement that is a masterpiece of counterpoint. But I just discovered that the central idea of that movement, the four note theme, actually comes from a Haydn symphony last movement, the Symphony No. 13 in D major. Here is how it opens:


And here is the opening of the Mozart movement: 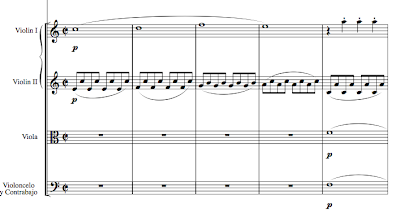 Apart from the difference in note values and key, that is exactly the same theme. Now, to be fair, Haydn didn't invent this theme either. It is age-old and has been used by many composers. But Haydn was the first to use it in this way in the finale of a symphony. Haydn's movement is just three or four minutes long, and Mozart's is about ten minutes and he creates a much more intricate contrapuntal structure with five different themes! But Haydn provided the seed from which the Mozart symphony grew. At least, that is what I hear. Let's listen to those two movements and see what you think. First, the Haydn, Symphony No. 13, last movement. The only good performance I can find on YouTube is of the whole symphony, so you have to scroll ahead to the 15:17 mark:


Now here is the Mozart movement:


Yes, the Mozart movement is extraordinary: one of the greatest symphony movements ever written. But a lot of the mood and expression, not to mention that four-note theme, is already there in the Haydn. Don't you agree?
Posted by Bryan Townsend at 7:31 AM