Much of Haydn's time in the 1770s was taken up with writing operas, mainly comic. Though Haydn, unlike Mozart, was never an outstanding opera composer, the discipline of somehow finding music equivalents to dramatic events certainly contributed to the advancement of his style. One of the most important aspects that was affected was rhythm. Haydn more and more achieved balanced and articulated rhythmic structures in which instrumental music became capable of narrative drama. This is a huge accomplishment for the art of music. Haydn's music is more and more effective as it is more unified: everything, instrumental color, rhythm and harmony, is working together.

Let's see how this works in the Symphony No. 79, written in 1784. It opens with a crisp eight measure period: 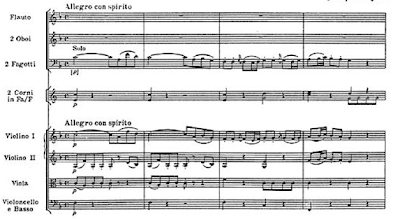 Notice how the accompaniment is always generating forward energy when there are held notes in the melody. Except at major points of articulation, this music is always pushing forward. A second theme begins with a motif that will play a major role in the movement:

This is completely unlike the counterpoint a Baroque composer would have used. Again, it is about rhythm and specifically blocks of rhythm alternating. In the Baroque they would have overlapped, for continuity rather than contrast. Later on in the development Haydn fragments just the little sixteenth-note motif from the first theme: 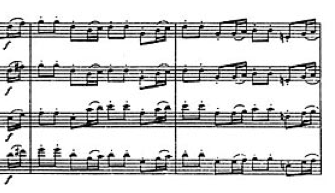 Again, notice how this is very much a rhythmic device.

The second movement begins as an Adagio, but this theme also has a lot of rhythmic activity:

This section, which has variations on this theme, is followed by un poco allegro on a different theme:


The Wikipedia author(s) of the article on this symphony can't see any connection, but these two themes have a very close family resemblance, especially in the fourth measure.

The minuet and trio continue with the rhythmic clarity and balanced phrases:

This continues with the last movement, a vivace in rondo form. Notice how the theme is rhythmically energetic, but clear and focused:

Also notice how well the accompaniment is crafted to impel the theme forward: the violas and cellos emphasize the downbeat while the second violin  provides the effervescence. Notice too how each four measure group is rounded off by a cadence formula and eighth notes in the violas and cellos. It looks simple, but everything is very carefully integrated to create one effect. Haydn is much less angular and asymmetrical than he used to be. I believe that every theme in this symphony is an eight measure phrase.

Now let's listen to a performance. Here is Christopher Hogwood and the Academy of Ancient Music:

Posted by Bryan Townsend at 9:22 AM