If I had a series called "Unusual Pieces of Music" -- I don't, yet -- this would undoubtedly be on it. 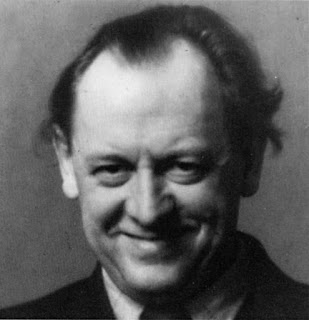 Kurt Schwitters (1887 - 1948) was an artist and poet who worked in various genres and styles in the world of avant-garde art between the wars. This was a remarkably fertile time for experimentation in art. Schwitters worked in Dada, constructivism, installation art (he was one of the founders), collages and sound poetry. In the last area, he was influenced and inspired by the prior work of Raoul Hausmann (1886 - 1971). Here is a sample of Hausmann's "sound poetry". As the announcer says, this dates from 1918 and was recorded in 1946:


As poetry goes, this is very experimental, of course. But since the first time I heard it, in the early 1970s, was in a concert of avant-garde music, I have always thought of this stuff as 'music'. The Ursonate by Kurt Schwitters is a much more developed work. Here is the 'score'. This is a more popular piece than one might think. Kenneth Goldsmith has managed to collect links to nine different performances here. The one that I heard in performance was by Canadian composer Chris Butterfield. Here is an excerpt:


This is a substantial piece, over a half-hour long in most performances. If I had brought this to my composition teacher back in the 70s, I think I know what he might have said: that there are problems with the notation. Just writing down syllables gives the performer no clue as to the rhythms, tempi and pitches. What syllables should be rushed? Which held back? Which pitched higher? Which lower? And so on. It is a bit like the problem with Greek tragedy and epic. We know that these pieces of literature were also pieces of music, that is, they were accompanied by lyre and flutes. The chorus in a Greek tragedy sang their lines; Homer chanted the Iliad. But we have none of this music. Similarly with the Ursonate--what we know of the music as the 'composer' intended is just his single recording of it. Here is an excerpt:


Did he perform it differently at different times? We don't really know. In any case, it might be a benefit to have the 'score' so underdetermined. Performers can have considerable freedom to interpret and re-interpret. Even non-musician performers like poets and artists can perform it as they don't have to read musical notation.

Now what can we say about this musically? Like that novel by Anthony Burgess, it is an attempt to reproduce in literature something of the structures of musical compositions. That's kind of interesting in itself. Though, oddly, not something that would necessarily have any influence on composers. The influence is flowing entirely in the other direction! Chris Butterfield was interested in this piece because he was interested in all sorts of Dadaist literature and the absurd generally. He was doing settings of writings by Gertrude Stein at the time.

From time to time I will dig around in the 20th century in the belief that a lot of potentially interesting experiments were going on, some of which we might tap for compositions in this consolidation phase of music history.
Posted by Bryan Townsend at 7:50 AM

Schwitters did in fact leave some instructions on how his Ursonate should be performed. And he actually started to compose a score by taking themes from the Ursonate and writing them down in musical notation. He never completed the project, and what there is of it is not exactly inspiring, but it is a rare example of Dada music.

Ah, a comment from a Schwitters specialist! Thanks. How would you define "Dada music"?

Er - I was afraid you were going to ask that... let's say music associated with Dadaists. Schwitters' Ursonate scribblings are very fragmentary but he simply seems to assign a set series of notes to each Ursonate theme, so in that sense it's not exactly revolutionary music. In fact it doesn't belong anywhere in particular but creates its own category, so very Schwitterian. The fact that he worked on it intermittently for years but never actually got anywhere suggests even he wasn't convinced by his own efforts.

I think that I would look in a couple of different places for music with Dadaistic qualities. The Italian futurists might qualify and what would you think about calling some things that Erik Satie did as Dada? His "Trois Pièces en Forme d'un Poire" for example?

Bryan Townsend
Born in Alberta, Canada, grew up on Vancouver Island, lived a decade in Montreal, resident in Mexico since 1998. Degrees in music from McGill University in performance, post-graduate study in musicology. Catalogue includes a cycle of twelve songs, two suites for solo guitar, chamber music for violin, viola and guitar, two guitars and harpsichord and other combinations including three pieces for guitar orchestra published by Guitarissimo of Stockholm, Sweden. Publications include two books of pedagogy for guitar, one on technique and the other on playing Bach, which included eight new transcriptions for guitar. Four Pieces for Violin and Guitar were published by The Avondale Press in Vancouver. In April 2015 a new piece for violin and piano, "Chase" was premiered in a concert at Belles Artes in San Miguel de Allende, Gto. Mexico. In the 2021/2022 season there will be two premieres: the String Quartet 2 in Vancouver and an untitled piano piece in the Pro Musica series in San Miguel de Allende, Gto. Mexico.