After Guillaume Dufay the next really important composer is Josquin des Prez, born near Hainaut in territory belonging to the Dukes of Burgundy and passed away in the same region in 1521 after a career that took him to Milan, Rome, France and Ferrara. He is one of the greatest composers of the Renaissance, a period particularly rich in music. He came at a time when the printing of music was just beginning and Josquin's music was a favorite of the early printers. Indeed, music by Josquin was so highly valued that they often printed music attributed to him but actually by another composer. Recent scholarship has been devoted to paring down the list of works to those only by Josquin. 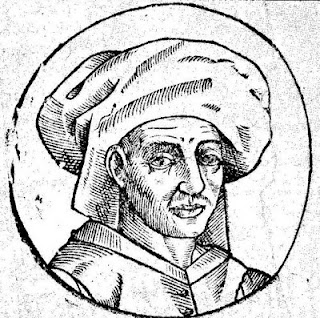 
He composed many settings of the mass using a variety of techniques such as basing one voice on a pre-existing melody, the cantus firmus, or using variations of a melody in all voices, or creating melodic material by encoding a name or phrase in musical notes (the Missa Hercules Dux Ferrariae uses notes drawn from the musical syllables of the Duke's own name: Re – Ut – Re – Ut – Re – Fa – Mi – Re, in English names for the notes, D C D C D F E D), or by structuring the music in canonic form.


Canon is one of those musical ideas that most of us encounter early on in school when we are taught to sing the round (another name for canon) "Row, row, row your boat" or "Frère Jacques" perhaps. Both are very simple tunes that can be sung by overlapping with themselves. For example, "Row, row, row your boat" is sung at an interval of one measure, four beats. That is, the second voice or singer, comes in when the first voice starts the second measure. This is so easy to demonstrate, but hard to put in words! "Frère Jacques" is sung at an interval of two measures, eight beats:


The idea of using a melody to accompany itself is one of those ideas that fascinates musicians. It is the musical equivalent of one of those M. C. Escher drawings: 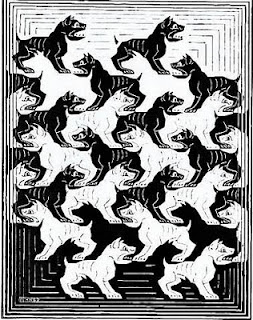 There are a lot of ways to write a canon other than having the second voice exactly copy the first. For example, in Josquin's mass Missa L'homme armé super voces musicales, he uses what are called "mensuration" canons extensively. In this type of canon, the voice that follows the leader does so in different rhythmic values. For example, the second section of the Agnus Dei from the mass is in three voices. The middle voice is the slowest. All voices start together and the lower voice is the same as the middle voice, but twice as fast, and the upper voice is the same as the middle, but three times as fast. Here, from Wikipedia, is the opening showing the relationship between the voices:


And here is a performance. The passage shown in notation above is heard at the very beginning:


Unearthly music... Here, for contrast is a frottola--a popular song form in Italy at this time--on the Latin text "In te domini speravi", which was supposedly written to remind a cardinal that he owned Josquin money:

Posted by Bryan Townsend at 7:41 AM

Thanks for your fine post on Josquin, and for
your outstanding blog which I've only now
discovered. Bravo!

Thanks, Carey! Welcome to the Music Salon. It's all about the music around here.