A very careful reader of this blog may have noticed that the work of Joss Whedon, creator of Buffy the Vampire Slayer, Angel, Firefly and Dollhouse is a secret pleasure of mine. One of the many things that attracts me to his work is the outstanding use he makes of music. He is a great fan of the musical genre and did one episode of Buffy (season six, episode seven) as a musical in which different numbers were an homage to the musical form. This episode, titled "Once More With Feeling", has consistently been one of the most popular. It is not only well-integrated with the story-arc, it is actually a crucial step in revealing all those things that the characters don't want to talk about, but seem compelled to sing about. The problem with it has always been that the actors are not trained singers and dancers. The brilliant plot device to account for this is that a demon has been summoned to town and everyone is forced to sing and dance by him. Great idea. The demon is played by guest star Hinton Battle, a seasoned professional who has won three Tony awards, all for roles in musicals. But despite this, the performances are rather awkward. A couple of cast members are pretty good singers, but others are not. The greatest weight falls on Sarah Michelle Gellar who is neither a singer nor a dancer, but had to learn for this one episode. The singing pretty much works, but her dancing is weak. It is a treat when Hinton Battle comes on as the demon Sweet and shows us how it's done: 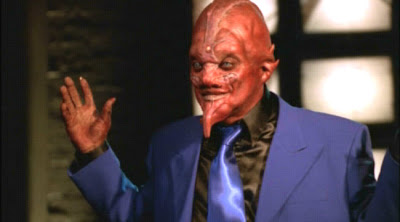 Unfortunately, this is no longer the golden age of the musical and even professionals now don't have quite the pizzazz of their predecessors. If you go back and watch a musical from the golden age, such as Singing in the Rain with Gene Kelly and Cyd Charisse, you will see a level of dancing that will take your breath away. Here is a still from that film: 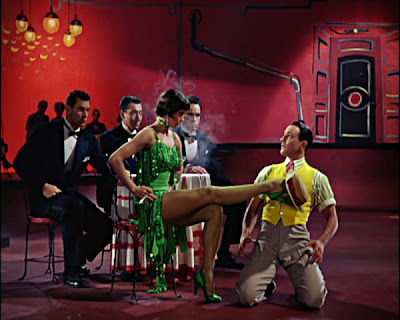 And here is the number itself:


Yes, Cyd Charisse does have the best legs ever--and she was in the Ballets russe at age 13. Gene Kelly does one number entirely in a downpour and he and Donald O'Connor do a huge number in one shot that makes you wonder how they could possibly have remembered the long, long sequence of intricate moves that they perform in unison. After watching them, even Hinton Battle, good as he is, looks a bit like an amateur and the dancing of the regular cast members is just feeble.

But I come to praise Joss Whedon, not to bury him! So let me get on to my real topic: the extraordinary internet-released family home movie called Dr. Horrible's Sing-Along Blog. I call it a "family home movie" because it was the creation of Joss Whedon, two of his brothers, Jed and Zack, and Jed's wife, actress Maurissa Tancharoen. This was released--only on the internet--in July 2008 and made a big splash due to Joss's extensive fan base. The moment it hit the web, it was getting 1000 hits per second and crashing the server. It was a big hit, but act three puzzled and confused many viewers. I think that the whole thing is a work of genius and one of the few really original dramatic ideas I have seen in a long, long time.

Joss was no doubt aware of the weaknesses of "Once More With Feeling" even though in dramatic terms it worked well. So in this new attempt at a musical, he avoids the problems by avoiding dancing (because he is still hiring actors mainly for their acting) and by selecting some pretty good singers. He also keeps to a small cast of only three main characters.


The viewer is set up for light, feverish, very hip comedy both by Joss's reputation (third-generation Hollywood sit-com writer) and by the opening. Every time I hear him say "smells like cumin" I just laugh. The songs are tuneful and well-written. One of the great gifts that music gives to drama is the ability to have three different vocal lines sung simultaneously and yet still be understandable. Music organizes speech rhythmically. Joss has a nicely done trio in the second part of act 1: "A Man's Gotta Do". The trio starts around 5:20:


Act 2 turns darker as Dr. Horrible discovers that pursuing his avowed ambition, to join the Evil League of Evil, may involve compromising his concealed (and more genuine) ambition: to meet, talk to and possibly date his dream girl, Penny. Act 2 begins with a duet between them, "My Eyes", in which each expresses the opposite to the other. The act continues with Billy's dream crushed by Captain Hammer. The patter song "Brand New Day" (very like Gilbert and Sullivan) in which Dr. Horrible resolves to really be evil, instead of just posturing to be so, ends the act.


Act 3 is where things get very strange. So far, as many, many modern dramas do, this one has followed the basic structure of Athenian New Comedy. There is a young couple, who want to be together. They are blocked by an older man, a 'senex iratus', who tries to thwart the young couple. The ending sees him vanquished and the young lovers happily married (or, in modern times, a surrogate of such). This basic structure permeates many modern dramas, even those not considered 'comedies'. Even James Bond gets the girl at the end. But what Whedon is up to here is fooling us into thinking he is doing comedy, when actually he is doing anti-comedy, sometimes known as tragedy. In the first part, we see Dr. Horrible on the verge of triumph:


But it goes horribly wrong from there on.


There are so many things here that make me think of Greek tragedy. Wikipedia tells us "the word τραγῳδία (tragoidia), from which the word "tragedy" is derived, is a portmanteau of two Greek words: τράγος (tragos) or "goat" and ᾠδή (ode) meaning "song", from ἀείδειν (aeidein), "to sing". Here we have no goat, but Bad Horse with his terrifying death whinny. The thing about Joss Whedon is that his most comic is very, very near to his most tragic. He says the most serious things in the most jocular manner. In both this and "Once More With Feeling" a bright, cheerful beginning leads to a dark, sad ending. The tragedy is that the real ambition, to be with the girl, has been wiped out by pursuing the false ambition: be evil and rule the world. And Billy ends up unable to "feel ... a thing". In my books, this is a serious drama and one of the most original I've seen in a very long time. Plus, I like the songs.
Posted by Bryan Townsend at 11:16 AM