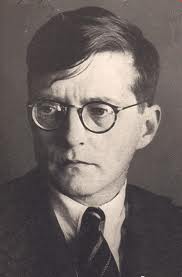 Shostakovich spent nearly all his life under the Soviet system and twice—once in the 1930s and once in the 1940s—his music was banned from performance and publication. Despite this, and the need to be constantly wary of falling into Stalin’s disfavor, Shostakovich developed into one of the finest composers of the 20th century—perhaps the greatest if we accept the opinion of the English composer William Walton. Shostakovich did not follow the usual path of modern composers who as a group became convinced that music had to be atonal and cut all ties with the music of the past. Instead he made use of the traditional forms such as string quartet, symphony and even followed in Bach’s footsteps by writing preludes and fugues for piano in all the keys. He was disdained for this by ‘right-thinking’ avant-garde composers but audiences came more and more to love his music. When his 5th Symphony was premiered in Leningrad in 1937 the audience, according to Mstislav Rostropovich, sat silently in tears and then erupted into 40 minutes of applause. Musicologist David Fanning has said that, “Amid the conflicting pressures of official requirements, the mass suffering of his fellow countrymen, and his personal ideals of humanitarian and public service, he succeeded in forging a musical language of colossal emotional power.”
His fifteen symphonies comprise an immense body of work that frankly we are still coming to terms with. The First Symphony was written in 1925 when he was nineteen years old as a graduation piece from the conservatory in Petrograd (later Leningrad and currently St. Petersberg). It was an instant success and is in the repertoire of most orchestras today. His Fifteenth Symphony was written in 1971. All together they take up ten or eleven CDs, ranging in duration from twenty or so minutes to nearly an hour and a half. Honestly, I could spend a month posting every day on just one of the more important symphonies. What I want to do right now is briefly introduce them with a few of the shorter movements. But first some background. Here is the Wikipedia article on Shostakovich. There is a great deal of controversy over Shostakovich's relationship with the Soviet regime, but the article steers a neutral path and is a good place to start.
Now for the music. My first sample is the third movement of the Symphony No. 12 in D minor, Op. 112, subtitled The Year of 1917, written in 1961. The third movement is titled Aurora and depicts the battleship Aurora that fired on the Winter Palace, beginning the Russian Revolution. What it is supposed to represent is not as important as how the music goes about it. If you don't have excellent speakers with your computer I recommend finding a CD of this movement so you can really hear the weight of the sound. Here is an enthusiastic performance conducted by Gustavo Dudamel:
The abrupt ending is because this movement shades directly without pause into the last movement. Next is the second movement of the Fifth Symphony, dating from 1937. This somewhat demented waltz (labeled an Allegretto) is the comic relief following the soul-wrenching first movement. Shostakovich had a real sense of humor that contrasted dramatically with his darker side:
The Symphony No. 14 (Opus 135) was completed in the spring of 1969. It is a sombre work for soprano, bass and a small string orchestra with percussion. There are eleven movements, setting poems by four authors. Most of the poems deal with the theme of death, particularly that of unjust or early death. Here is the first movement, on a poem by Federico Garcia Lorca:
Eerie in its absolute simplicity. I intended to put up just the first movement, but I wanted this performance by Fischer-Dieskau and the only clip I could find includes the second movement. Just pause the clip at 4:44. For my last excerpt here is the third movement of the Symphony No. 8 in C minor (Opus 65) written in the summer of 1943 in the middle of WWII. Shostakovich describes it as a march with elements of a scherzo. Here is Haitink conducting the Concertgebouw:
This movement too ends abruptly because it goes directly into the next. So, four brief movements from four symphonies: one stirring and martial, one a frivolous and demented waltz, one desolate sorrow and one ominous and threatening. Few composers have this kind of range. I hope you have found at least one of these excerpts compelling. If you did, I suggest listening to the whole symphony of which it is a part.
Posted by Bryan Townsend at 7:09 AM