Artistic Manifestos and the Art Market

This would be a good topic for a dissertation or two. The arts manifesto is a 20th (and now 21st) century phenomenon. One of the earliest was this one: 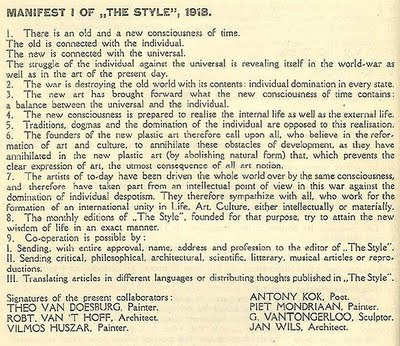 It was modeled on the Communist Manifesto and basically outlines a strategy that is not merely artistic. The best expression of this strategy is probably by Antonio Gramsci. He proposes that the working class needs to exert a cultural hegemony in society in areas like art and education. The arts manifesto is one of the ways in which this strategy is expressed.

Let's back up a bit: the economics of art is an under-examined field, but it is basically the case that, up until the 19th century, most artists had noble patrons. Guillaume Dufay, the 15th century composer, was employed by the Pope, for example and Haydn was court composer to the Esterhazy family. Mozart was supported by the Archbishop of Salzburg and later by the Emperor Joseph II of Austria. Beethoven had a variety of patrons, some from the Russian nobility, and was given an annual stipend by a group of patrons. This proved to be unreliable and he made significant sums from selling publishers rights to his compositions. In the 19th century composers, like Chopin, more and more found their income to derive from the middle class music lover.

It is an over-simplification, but in the next stage, towards the end of the 19th century and throughout the 20th century, saw the rise of popular music as an economic force. This grew steadily until reaching a climax with the Beatles in the 60s. As late as the 1950s a classical pianist, Van Cliburn, could sell more records than Elvis Presley. Nowadays classical music sales are a tiny fraction of popular ones. Beginning just after the turn of the 20th century, classical composers needed to combat the competition from popular music. One way was through seeking a kind of cultural hegemony. I have no doubt that most of the artists and composers were quite serious in their manifestos, but the associated modernist, avant-garde, progressive movement also served non-political purposes as well. An artist or composer could state his artistic ideals in a way that distinguished him or her from lesser artists who merely painted or wrote music without a higher purpose. This served a competitive need: my music is more important because I am following such-and-such a manifesto. My music is the music of the future, while theirs is mere note-spinning. Hence the futurist manifesto The Art of Noises. Some points in this manifesto were:

I think you can see that this manifesto, dating from 1913, had considerable influence. Composers now had an additional way of competing with other composers: they could present their ideals in a manifesto. After the patronage of the nobility had disappeared and popular music was becoming an economic force, composers had to look elsewhere for funding. The involvement of governments in the support of the arts offered an alternative form of patronage. But how do you persuade bureaucrats, who were not musically trained, of your importance? The manifesto! Progressive politicians and bureaucrats would be inherently sympathetic to them as they themselves were engaged in the same project.

I don't want to say that these manifestos were not often pursued with genuine idealism, but at the same time they offered a guide to methods, they also offered a way to win support from those who had funding to dole out. And so we see the Gramscian long march through the cultural institutions of the West which means that progressive art nearly always has a political content even if only in opposition to the mainstream culture.

One interesting recent phenomenon is the Stuckist movement which seems to be pushing back in satirizing the excesses of post-modernism.

A consequence of the political underpinnings of modernism in art is that the history of music in the 20th century has been written from a biased point of view. Those composers who were merely composing and not attempting to pursue the goals and manifestos of modernism were consistently undervalued. Two prime examples were Sibelius and Shostakovich. Because they wrote in established traditions and used tonal structures they were obviously not following the program. The futurists had only limited influence with their emphasis on noise and timbre--though one that became more important later on with the development of synthesized and tape music--but the primary progressive manifesto was the development of atonal music by Arnold Schoenberg and his disciples. This method of structuring music utterly destroyed traditional harmonic relations and since it was the music of the future, all those still using tonal structures were obsolete. For most of the 20th century this doctrine was taught in music schools as the norm. If you studied composition, you were not allowed to write tonal music. Sounds odd, I know, but tonal compositions written after atonality was discovered were deemed 'derivative' and hence not important.

We need a new history of 20th century music that is not written from a biased standpoint. Well, that's probably not possible! Maybe one with a different bias, at least?

Schoenberg, Violin Concerto, 1936
Posted by Bryan Townsend at 8:53 AM

Email ThisBlogThis!Share to TwitterShare to FacebookShare to Pinterest
Labels: manifestos