I don't usually don't do reviews of anything, but I have had an excellent experience with my new laptop, so here are some comments. I wanted a lighter laptop with a larger screen than my older Macbook Pro so I bought a Chromebook. They take some getting used to, but I have used them before and they are quite manageable for most purposes. I bought the newest Acer 15.6 inch model: 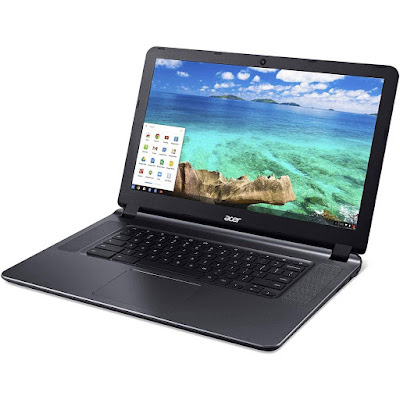 As I said in the previous post, I just got the laptop and charged it up the day before getting on the plane to Toronto. As I forgot the charger, it had to last the whole six days I was there, which it did, but after checking my email the last morning, it only had five minutes left! Pretty impressive, especially compared to my older MacBook Pro that only has a couple of hours of charge. I love Chromebooks because they boot up in just a few seconds and shut down instantly. Mac and Windows machines, especially the latter, seem to take geological time to boot up.

So what is the hitch? Chromebooks run the Chrome operating system from Google which will not run any ordinary applications. So I can't compose on the road as it won't run Finale. It also won't run Word or Powerpoint or any other ordinary program. What it will run is Google docs so for normal purposes just open your Word file with Google docs and edit therein, saving it as a Word file to send to others. Mind you, I haven't done this much, but I think it would work. For web browsing there are no issues. I am writing this review on my Chromebook.

Why did I get a Chromebook instead of a MacBook Air like everyone else? A new MacBook Air with a 13' screen costs north of a thousand dollars. My 15.6' Chromebook cost $212 (plus $58 shipping and import fees to Mexico).

How does the screen definition and speakers compare to my older MacBook Pro? Quite well. Viewing this YouTube clip on the Chromebook compares well with the Mac:


The picture seems very comparable (mind you, my old MacBook does not have a retina display) and the sound also seems just as good--a bit better in fact as it delivers more volume at max. The MacBook is a bit quiet even when you crank it up. The Chromebook has some fair-sized speakers on either side of the keyboard. The keyboard is nothing special, not as nice as on a Mac, but perfectly useable.

So there you have it. Why are Macs so much more expensive? They are gorgeous examples of industrial design, and Apple has found that their customers are loyal enough to accept higher prices. Windows machines are more expensive largely because of the hefty fee Microsoft charges for the operating system. So, you might consider buying a Chromebook at a fraction of the cost.

UPDATE: How hard was it to connect my Chromebook to my HP printer? It took 30 seconds.
Posted by Bryan Townsend at 7:49 AM

Email ThisBlogThis!Share to TwitterShare to FacebookShare to Pinterest
Labels: technology

Second all you have to say. I had a Chomebook Flip (I think it was called) which lasted about ten hours and was so blessedly simple to use. My one reservation about it was the complete reliance on Google. Apart from my issues about the company itself, my concern was that, for example, if Microsoft were to disappear, my laptop would still work -- but what if Google were to cease to be, or to discontinue some of their services? Then where would that leave my Chromebook? I like owning things -- software, documents, etc. -- and am very suspicious of things that seem to only exist in 'the cloud'.

Oh yes, I share your misgivings entirely. This is why I am not a big fan of music streaming services. I don't really feel I have a piece of music unless the CD is sitting on my shelf. The streaming version could be taken away at the drop of a hat. But even with that, I see the Chromebook as being very useful in the near-term. I was looking around yesterday and found some music notation programs written for Chrome. Not for professional composers, of course, but probably good enough to jot down some ideas while traveling.

I use two laptops, one devoted solely to the Muse: for Spotify and Idagio, and for streaming programming from the Berlin Philharmonic, the Wiener Hofop-- Staatsoper, etc. When that one collapses, I guess I could replace it with a Chromebook of some variety, or so it sounds, so long as there is a port to attach it to the external speaker.

Steven, You meant, 'it lasted ten hours without needing to be recharged'-- eventually I caught up.

Had to get a new mobile recently and the default settings put practically everything 'into the cloud'. Have got everything (I think, or, I tell myself) earthbound for the time being but I'm sure the little machines will try to reconnect every time one of them updates. Tsk.

Yes, the Chromebook has a headphone port which is what I assume you would use for external speakers. It also has Bluetooth.

Ha, indeed I did.

Please don't think me sarcastic or flippant for saying this, Bryan, but whatever happened to pencil and manuscript paper? I tend to take a smallish music notepad when I go away which is much less faff than software. Moreover, I have to say I find Sibelius (and from what I remember, Finale too) to be the most irritating piece of software ever invented, where basic requirements are hidden away in an absolutely perplexing menu system! Though I have very modest notation requirements -- perhaps a composer like yourself benefits from software in ways unknown to me.

Not at all Steven! I reverted back to pencil and paper when I was planning out Dark Dream. And music software often seems like a Procrustean bed. I sometimes utter a "ha!" when I manage to conquer a particularly knotty problem. But the benefits are enormous. For one thing when you are done, so is the score, ready to be printed out for the performers or for publication. This in itself is enormous. There are also the benefits of being able to play back at least the sections able to be notated conventionally.