Schubert and the Invention of the Song Cycle

A very long time ago I wrote a post in which I attempted to characterize different levels of creativity. Search as I may, I cannot seem to find it to link to, so let me see if I can remember the gist of it. I posited that you can see pieces of music in terms of just how much real creativity was involved in their composition. For example, a simple exercise in composition might be to take a minuet by Mozart as a model and write a piece based on reproducing exactly its harmonic and rhythmic structure, but in a different key and with new melodies. There is creativity, certainly, but it is limited to certain aspects only.

I don't recall the categories I came up with, but there were levels. For example:


I think in my earlier post I came up with a lot more levels or categories, but I think you get the point.

Now, the creation of an entirely new form or genre is a rare event and usually quite complex, historically. For example, I credited Monteverdi with the invention of opera, but his "L'Orfeo" of 1607 was not the first opera as Jacopo Peri wrote a couple of similar pieces ("Dafne" and "Euridice") just a few years before. You might consider those as experiments in opera. Monteverdi wrote the first successful opera.

This should give a little context to the creativity involved in the creation of the new musical form or genre of the song-cycle. I say "form or genre" because it has aspects of both. A song-cycle or set or series of songs is, well, a group of songs that form a whole. They might form a "ring" of song as the very first example by Beethoven shows. His "An die ferne Geliebte" ("To the Distant Beloved") creates a circle in which the last song links back to the first through the reappearance of a theme, forming a circle or ring as in a finger-ring ("Liederkreis" in German). This set of six songs by Beethoven is the first, you might say, experiment in the genre. It is a unique composition that he never repeated and likely had a biographical inspiration, i.e. there was actually a "distant beloved". No-one had done anything like this before. But while we could, and do, credit Beethoven with the invention of the song-cycle, this contribution was so overshadowed a few years later by Franz Schubert that he is either given co-credit or the slightly more ambiguous honor of being the composer who "established" the form or genre as Monteverdi did with opera. (Carl Maria von Weber also wrote a song cycle, but it does not seem to have had much influence.) Beethoven's songs were written in 1816 and if Schubert had not followed up with his two major cycles in 1823 and 1827 the whole idea might have simply faded away.

While you might be able to find a really early example, such as a set of songs by the 13th century Galician jongleur Martin Codax, the song-cycle is really a creation of the 19th century and after the two sets by Schubert there followed many others by Robert Schumann, Johannes Brahms, Hugo Wolf, Gustav Mahler and even ones outside German-speaking countries with cycles by Hector Berlioz, Gabriel Fauré, Francis Poulenc, Manuel de Falla, Benjamin Britten, Olivier Messiaen and others. Indeed, the song cycle is a firmly established genre not only for voice and piano (or guitar), but with chamber ensemble (such as "Pierrot Lunaire" by Schoenberg) or orchestra (examples not only by Mahler but also by Shostakovich and many others).

But it was Schubert that really launched this whole idea in a formidable way and he did it with two sets of songs: "Die schöne Müllerin", a set of twenty songs composed in the summer of 1823, and "Winterreise", a set of twenty-four songs composed in two parts in 1827. A third set, "Schwanengesang", consisting of fourteen songs, was a collection of some of the last songs Schubert wrote, published after his death, so not a cycle in the same sense as the first two. The two cycles that Schubert intended as such are still considered to be the foremost works in the genre, though "Dichterliebe", a set of fourteen songs by Schumann, is a very close second.

Schubert is very likely the greatest song-writer in history, not only for these two remarkable works, but also for the other six hundred songs he wrote, some of them of extraordinary power.

Today let's just take a brief look at Die schöne Müllerin which we could translate as "The Miller's Beautiful Daughter" or, in a more 19th century manner, "The Lovely Maid of the Mill". Incidentally, there was a rather interesting album released in the 1960s by the Incredible String Band titled "The Hangman's Beautiful Daughter" that has to be a reference.

Here is the first page of the score: 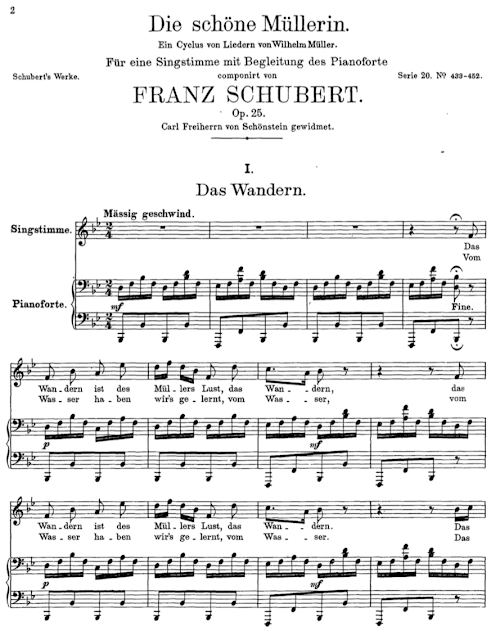 Though it was published originally for high voice (tenor or soprano), it can be transposed and performed by other voice types. Here is a list of all the songs:


The narrative runs roughly as follows: a young man, a journeyman miller (someone who has completed basic training, but is at the beginning of their working life) is wandering happily along and comes to a brook which leads him to a mill. He falls in love with the miller's daughter but she hardly seems interested--she may be above his station, socially. He tries to impress her, but is overshadowed by a hunter, dressed in green. The color green becomes an obsession as the young man had given the miller's daughter a green ribbon. Things end badly as the young man, in despair, seems to drown himself in the brook. The last song, ironically, is a lullaby sung by the brook.

Here is a link to the complete score and here is one to an English translation of the text. The poems are all by Wilhelm Müller, who, like Schubert, died very young at only thirty-two.

That should give us enough introduction. Now let's listen to the whole cycle, which takes about an hour to perform. I'm going to put up three clips. The first one is a live performance, with English subtitles, with Dietrich Fischer-Dieskau accompanied by Andras Schiff:

The second is with Ian Bostridge accompanied by Mitsuko Uchida:

There are many other versions available, of course. Here, for example, is part of the cycle accompanied by guitar with Juan Antonio Sanabria, tenor and José Manuel Dapena, guitar:

It is not well-known that Schubert himself played the guitar and composed some of his songs on the guitar. During his lifetime a number of songs by him were published in Vienna with guitar accompaniment.
Posted by Bryan Townsend at 9:04 AM

I knew you had written something about Schubert and the guitar! Off on one of my adventures of discovery-- cause being that there is a recital of some Schubert lieder here Sunday, the singer accompanied by a guitarist-- (didn't know anything about Schubert's guitar or...) I found this essay [http://www.jacaranda-music.com/Schubert.html], by Stephen Kenyon, who seems to be a British guitarist and composer, written evidently some eight or so years ago, but based on earlier researches. The man's conclusion-- "I would like to propose the following form of words, or something like it, for anyone wishing to be fair to this subject"-- very carefully worded:

"Schubert may possibly have played the guitar in his early youth: if this interest persisted into his mature years there is little tangible evidence for it."

I take it that the doctrina communis is that Schubert was much more a guitarist than that judgment would allow? Don't have access to Grove online; Wikipedia, at any rate in English, doesn't mention the guitar, alas.

It occurred to me also to look to the Wikipedia article 'List of compositions by genre', which includes the single work for guitar and &c, the D 80 Terzetto. Hmm. Kenyon says: "How he came by that degree of instrumental knowledge [required for the composition of the trio] cannot be said for certain: the simplest way would be by playing guitar a bit, but a composer of genius (albeit youthful) may have the aural skills to do so without."

Marc, thanks again for questioning my comment. I was not aware of the Kenyon article, which I read in its entirety. He seems to have done the research and I would have to agree with his conclusion. I suspect my sense of Schubert as having some connection with the guitar comes from having played in the quartet that he arranged from the trio by Matiegka. A nice enough piece, but no real evidence that Schubert was a guitarist. He certainly did not write a single piece for guitar in his mature years as a composer.