Orchestral Etiquette or "Why is the Concertmaster Late?"

In the Friday Miscellanea I put up a link to an article on some odd, but frequently asked, questions about concert etiquette. One of them was:

6) Why is the concertmaster late?

It does look dubious when the most visible seat is unoccupied when the concert is set to start. I’ve even overheard some audience members in big cities remarking about how funny it was everyone applauded for the late musician. The lateness of the concertmaster is just another way audiences know the concert is starting and gives an extra minute to silence cell phones while the orchestra tunes.

It seems obvious that the writer had no idea about the correct answer to this one! The symphony orchestra concert has a long history and during that time a number of traditions have grown up. One of these is the special role of the concertmaster.  The Wikipedia article I just linked to is a bit of a stub, correct as far as it goes. If we go back far enough, we find that orchestras in the 17th and 18th centuries did not usually have conductors. But they did have concertmasters. The concertmaster is the leader of the first violins and, historically, the leader of the orchestra. It was he that tuned and directed the other players. Vivaldi was a famous example. Sometimes, especially in the case of a keyboard concerto, the keyboard player, usually also the composer, would tune and direct the orchestra from the keyboard. This is still sometimes done as we can see in this clip of a Mozart piano concerto played and directed by Mitsuko Uchida with the Camerata Salzburg:


In time, as orchestral compositions became more complex rhythmically and as the size of the orchestra grew from twenty or so players to over a hundred, the need for a conductor became evident. Beethoven was one of the first to conduct his own symphonies in public. Perhaps the first professional conductor who toured conducting various orchestras was Hector Berlioz.

So it all makes perfect sense, both musically and historically. Here is a caricature of Berlioz conducting: 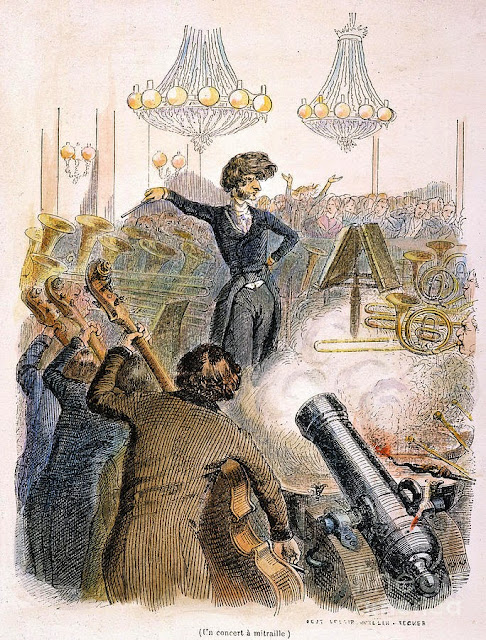 UPDATE: In modern times, as in the Uchida performance, the orchestra was likely tuned by the concertmaster playing an "A" on the piano before the soloist enters.
Posted by Bryan Townsend at 9:26 AM