There is a part two because in part one I only discussed the first movement. Now I often just talk about one movement of a concerto, usually the first, but sometimes, as in the case of the Concerto for Piano in C major, K. 467, I talked just about the slow movement. But the main reason I want to follow up my first post on the Beethoven Violin Concerto is that three different commentators said that they really disliked the theme of the last movement! This is a very unusual state of affairs, so let's have a look at that last movement.

But first, a little context. One article on the Beethoven Violin Concerto says that it was the only significant concerto for violin and orchestra between the five Mozart wrote in 1775 and the Violin Concerto in E minor by Mendelssohn premiered in 1845. This is to ignore completely the several concertos that Paganini wrote, mostly in the 1820s, but that is presumably because, while they are virtuoso works for the violin, they are not terribly interesting from a compositional point of view. There is an interesting coincidence with the Mendelssohn concerto: Beethoven's Violin Concerto was nearly forgotten after its premiere and did not become famous until the young virtuoso Joseph Joaquim performed it in 1844. The conductor of that concert was Felix Mendelssohn! He had been mulling over his own concerto since 1838, but it might be that the encounter with the Beethoven hastened his own work, which he completed that year, to be premiered the next. An interesting coincidence nonetheless.

Let's imagine ourselves in the year 1806. Beethoven had already transformed the symphony with his huge Symphony No. 3 and was just in the process of doing the same with the piano concerto as he completed his Concerto No. 4, but the violin concerto was still just as Mozart had left it in 1775: a vehicle for display both lyrical and virtuoso of under thirty minutes. The middle movements were often in the form of an operatic aria, that is to say, a sonata form without development, which Beethoven uses in his Violin Concerto. He also takes over without significant change Mozart's rondo finale (though without the section in a contrasting tempo that Mozart sometimes uses). Here is the theme to a typical Mozart rondo, this one from a piano sonata: 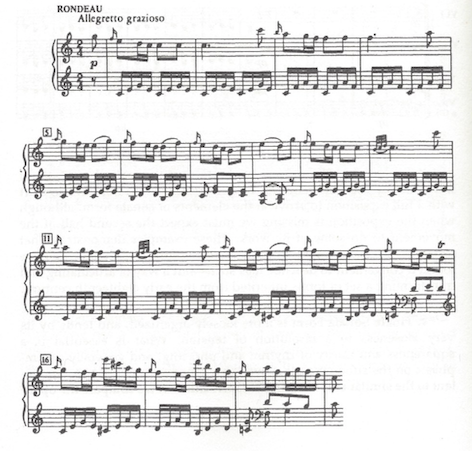 Fairly typical sentence with an eight-measure first section ending with a half-cadence, answered by a section section ending in a full cadence--but extended by three measures using a sequence. The basic idea is built around the notes of the triad, as is usual with all Classical themes. Here is the briefer theme to the Beethoven Violin Concerto rondo:

Four measures ending with a half-cadence then a very similar four measures ending with a full cadence. Rather more like a period than a sentence. [Note: all this stuff about sentences and periods is largely derived from the excellent work on Classical theme types by William Caplin with whom I did a doctoral seminar.] This is actually rather similar to the opening theme of Mozart's Eine Kleine Nachtmusik:

Where you notice that Mozart is alternating between tonic and dominant, but with the tonic in the strong position rhythmically.

Without doing some kind of exhaustive statistical survey of Mozart's practice, the one thing different that I notice is that Beethoven's theme rhythmically stresses the fifth of the tonic chord, something Mozart didn't do very often. Perhaps it is that somewhat bumptious leap from the tonic down to the dominant of the scale that my commentators find off-putting. Mozart probably would not have done that. But apart from that, the Beethoven rondo really unfolds very much like a Mozart rondo, if a bit more muscular and heavily orchestrated.

I think the real problem here might be more deeply embedded. Haydn and Mozart between them had constructed a remarkably flexible and expressive musical 'language' that Rosen calls the Classical Style. Beethoven, heir to this language, from about 1806 on forced changes to it that ultimately destabilized the balance that Haydn and Mozart had achieved. The reward was basically the whole gloriously rich and expressive music of the 19th century, so much of which was inspired by Beethoven. But alongside the remarkable achievements of late Beethoven, are some transitional works and some, like Wellington's Victory, that later generations have considered misjudged. I think the problem with the Violin Concerto is that while he transformed the first movement very successfully, Beethoven was content to leave the last two movements rather unchanged from the Mozartean standard. This being so, the listener, after that sublime first movement, expects rather more from the last two. The second movement is rather nice, a Haydnesque hymn, but the last tends to grate just a tad--it is rather too 18th century and not enough 19th century in taste.

Beethoven wrestled with the problem of last movements for the rest of his life, most memorably in the String Quartet op. 130 where his original final movement, the Grosse Fuge, was so excessive that he wrote a slighter rondo as an alternative. Another odd example is the last movement of the Symphony No. 9 where, instead of a conventional triumphant or dance-like finale, he writes a cantata with chorus and vocal soloists! Beethoven's problem, and one he passed on to all 19th century composers, was how to end a grand romantic work. Schubert found a solution in his Symphony No. 9 and so did Mahler in his Ninth Symphony.

Let's end by listening to the last two movements of the Beethoven Violin Concerto. First, Itzak Perlman with the 2nd movement, Larghetto:


And here is David Oistrakh with the last movement, Rondo:

Posted by Bryan Townsend at 9:30 AM

I actually don't find anything wrong with the last movement, in fact it has excellent melodic writing. I would say it's maybe a bit Mozartean but heavier on Beethoven's punchiness. The 2nd movement is a bit small in size to say the least but it's still nice.

Yes, until people started commenting on it, I was ok with the last movement as well. But it is certainly the first movement that raises this concerto into the immortal category!