As I mentioned last week, the two great concertos K. 466 and 467 are a bit akin to the two last symphonies of Mozart, no. 40 in G minor and no. 41 in C major. Unlike later composers, Haydn and Mozart both used minor keys fairly rarely and pieces in minor tend to have a special intensity. There are only two piano concertos in minor out of the over twenty that Mozart wrote: this one and K. 491 in C minor. Similarly, out of the over forty symphonies from Mozart there are only two in minor, the 40th and the 25th, both in G minor.

It was the D minor concerto along with a few other remarkable works like the 40th symphony and Don Giovanni that created the mythic persona of Mozart that the 19th century was so enamored of. As Charles Rosen says:


It is one of the fullest realizations of that aspect of Mozart which the nineteenth century quite rightly names 'daemonic', and which, for so long, made a balanced assessment of the rest of his work so difficult.

Because the daemonic is just one side of Mozart, a very complex figure.

This concerto is not necessarily a greater composition than many others from around this time, but it does have considerable power, some of which has to do with an impeccable control of rhythmic impetus. The very opening has considerable punch with its French overture like upbeats and syncopated accompaniment:


When this orchestral theme returns, this time joined by the solo piano, we see another rhythmic layer added in the sixteenth notes in the piano: 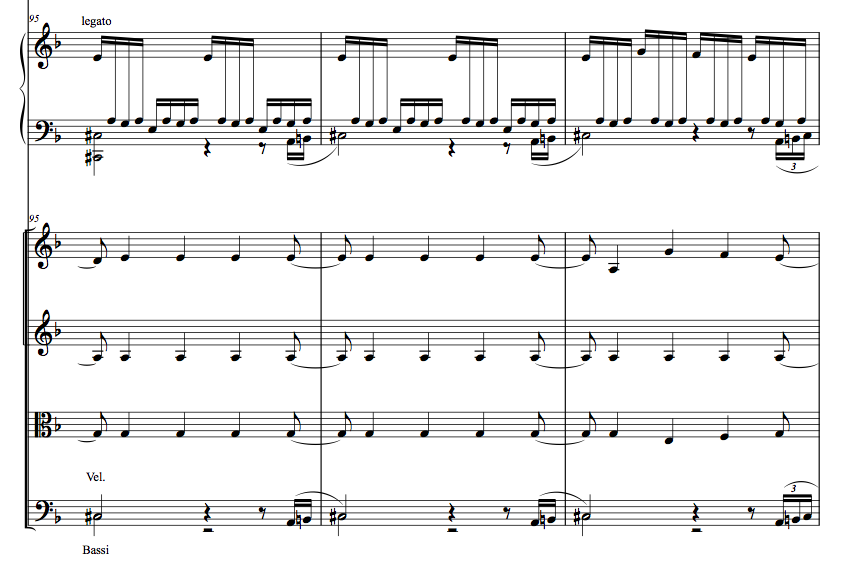 And soon the harmonic tempo quickens as well with the one harmony per bar changing to two: 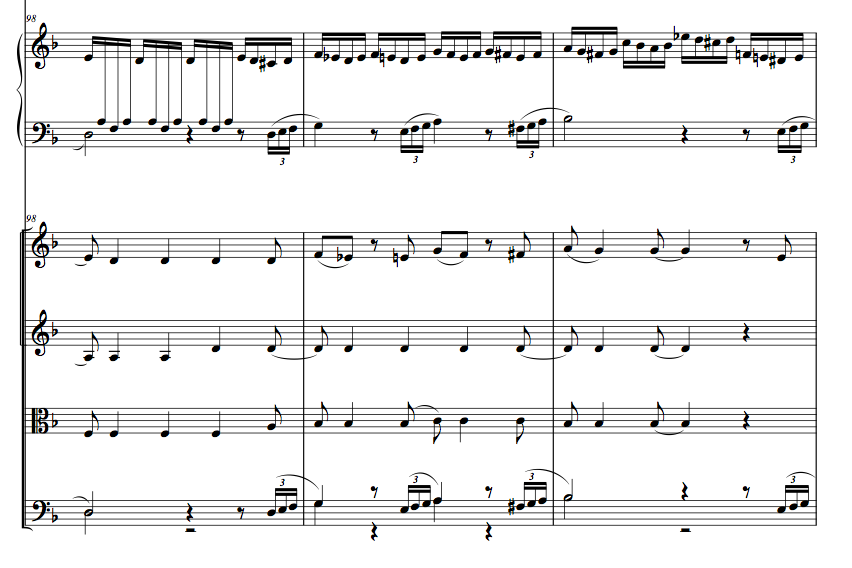 There are a host of other details in this passage that include a stacking up of wind entrances, doubling of rhythmic values in the violins and violas, and movement of the sixteenth notes to the left hand of the piano. This is all done in a subtle, overlapping manner but the general effect is that of a building excitement. It might not be too far-fetched to see this kind of passage as being the model for the famous "Rossini crescendo".

Let's listen to this first movement performed and conducted by Mitsuko Uchida. The passage I was excerpting above appears around the 3:49 mark:


Another very revealing comment by Rosen, found in his The Classical Style p. 233 is:


No concerto before K. 466 exploits so well the latent pathetic nature of the form--the contrast and struggle of one individual voice against many. The most characteristic phrases of the solo and the orchestra are never interchanged without being rewritten and reshaped: the piano never plays the menacing opening in its syncopated form, but transforms it into something rhythmically more defined and more agitated; the orchestra never plays the recitative-like phrase with which the piano opens, and which it repeats throughout the development section.

He is referring to this passage, when the solo piano first enters:

This comes at the 3:16 mark in the above performance.

Instrumental solos prior to this, whether in concertos by Vivaldi or Bach, or even in symphonies by Haydn, were really about simple musical contrasts of dynamic, texture and timbre. They carried little or no existential weight. Often they were written as a compliment to a gifted soloist, enabling them to show off their virtuosity. But as we see in this concerto particularly, Mozart went far, far beyond these simple contrasts and goals. The introverted entrance of the piano is itself a contradiction of the normally virtuosic role of the piano soloist that we are used to even in previous concertos by Mozart. Instead, the significance of every musical detail becomes more than merely musical in a technical sense. It was this that the Romantics loved and responded to in Mozart. There is a dramatic intensity to this music that is rather a new thing in instrumental forms. This came naturally to Mozart who was, uniquely, also the master of opera.

After this concerto by Mozart and ones by Beethoven that were obviously inspired by this kind of heightened dramatic treatment, the concerto form was forever altered. This concerto was a favorite of Beethoven who not only played it himself, but composed a cadenza for it (as Mozart did not leave one). This concerto was premiered on the 10th of February, 1785 and, as we learn from a letter from Mozart's father, Leopold, may have been played with no rehearsal! Mozart only recorded the completion of the work in his journal on the same day.

Let's listen to another performance of the piece. Here is Malcolm Bilson on fortepiano:

Posted by Bryan Townsend at 9:27 AM

Interesting observations. Yes, the first movement is quite dramatic. The 2nd movement is also interesting. The piano and the rest of the orchestra shares more material but there's a section that is very dramatic. All of the sudden a punchy chord comes from the orchestra and the piano plays in 16th triplets. This section ends by slowing down the piano rhythm to 16th notes, triplets and then finally to 8th notes and we're back where we started (pretty much) in terms of thematic material. The 3rd movement is also pretty dramatic, especially with the timpani adding some punch. It ends in D major though.

I can see why Beethoven saw it as a favorite concerto.

Yes, this ending with a section in major was something that the 19th century was not so comfortable with. Mind you, Beethoven used the same idea in his Symphony No. 5. But the Romantics liked to keep the minor gloom to the end!! Oddly enough, they had a different attitude towards literature as it was the 19th century that insisted on "fixing" the more tragic endings of some Shakespeare plays. The ending of King Lear was so deeply sorrowful that they usually changed it!