Today I am finally getting to taking a closer look at the Violin Concerto by Jean Sibelius. Sibelius is rather, in the terminology of theorists, "refractory to analysis"! Hmm, well, after checking around I see that this phrase, "refractory to analysis" certainly doesn't seem common, at least not in music. So I will explain. A piece or repertoire of pieces that are refractory to analysis resist analysis. They do not take apart easily. Sibelius wrote very atmospheric, evocative, charming and powerful music, but just how he did this is not at all obvious. Looking around on the web, I notice an interesting attempt to talk about Sibelius in an odd place: the Huffington Post. A couple of years ago they actually did a whole post on the Violin Concerto and Sibelius. Here is what the writer noted about Sibelius:


I've wanted to cover something by Sibelius before, but I've put it off because he's so difficult to analyze and break down.  Sibelius doesn't adhere very well to traditional classical forms.  He does things his own way.  It's even more of a problem because he doesn't just blow off tradition and do things his own way; he sort of does it traditionally but then mucks around with things so much that describing it usually makes it impossible for me to whip out my "handy dandy blue graphic" boilerplate.  We're forced into the position of trying to describe his music this way:  "It's kind of like a Ford Prius, except it's a submarine..."

Go read the whole thing. The writer finds a great clip of Maxim Vengerov talking about the first movement with a student.

The tonal system in music is a complex web of relationships. We take as the "norm" in this system, the way the relationships were used by Haydn, Mozart and Beethoven, but as soon as you start, as it were, adjusting the values of the relationships, the whole quality of the web changes. Take, for example, the way Wagner delayed and delayed resolution via cadence in the Prelude to Tristan. This changes the quality, the "feel", of the system so much that it becomes quite a different kind of thing to the system used by Mozart, for whom resolution via cadence is a frequent occurrence. Similarly, if you alter some of the fundamentals of voice-leading, say, by taking what would, in the HMB ("Haydn, Mozart, Beethoven") version of tonality have been a 4-3 suspension and instead invert it into a 4-5, what? We don't have a word for this, expansion, maybe? In any case, you get something that is still tonal, but with a whole different quality from the HMB kind of tonality. And that's how Sibelius starts his violin concerto:

This has a magical quality, achieved with the simplest of means. Here is a version showing the accompaniment: 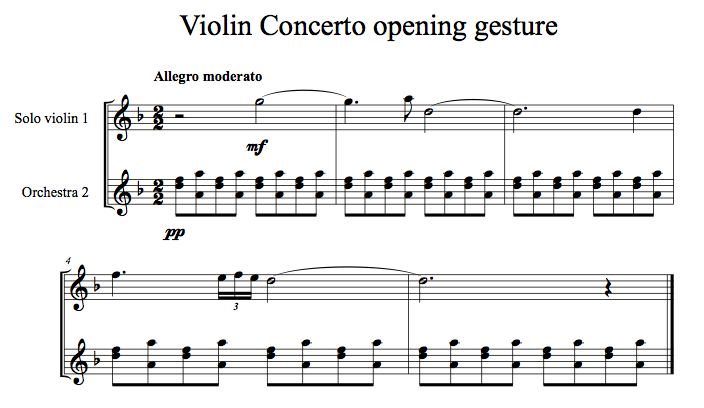 This is so simple, yet fresh and original. The whole evocative effect comes from starting with that unexpected G that opens out to the A. The chord is simply D minor in the accompaniment. This opening gesture is developed into a considerable solo for the violin with occasional little echoes in the orchestra (solo clarinet, for example). We soon hear, low in the violin, the kind of basic or "ur-motif" for the whole piece (it appears in every movement):

Now the interesting thing about this, which is still accompanied with D minor harmony (though with some chromatic decoration) is the presence of that G again. There is also a prominent G# in this opening section. The significance of this is that G is subdominant harmony. In HMB tonality, the subdominant area is always used to relax tension. Movement to the dominant heightens tension, to the subdominant relaxes it, which is why the subdominant is always the harmony of choice for codas. What Sibelius is doing here is using the subdominant G as the expressive marker. This is where the magical atmosphere comes from, turning HMB tonality upside down, in a way.

Here is the big, expressive, second theme, prefigured in the orchestra, but as it appears in the violin (down an octave):

This is the one the Huffington Post writer describes as "switching back and forth from B flat major to B flat minor in midstream." But, it is nothing of the kind. I put in the orchestral accompaniment (just the low strings) to show that this is actually just V to I in the relative major of B flat minor, i.e. D flat major. Again, this is kind of HMB tonality turned upside down. As we have seen in countless pieces by Beethoven in particular, he loves to go to the major key of the Neapolitan, a semitone above the tonic. Here, Sibelius is going to the major key of the leading tone: D flat (well, ok, or the tonic lowered a semitone, it makes no difference).

Just from looking at the first few minutes of the piece we can see a few things about how Sibelius works: he writes very tonal music, but he tends to turn some of the usual procedures upside down, suspensions becoming expansions and suchlike. He does not over-compose. He sees nothing wrong with beginning with a simple tonic tremolando in the strings, pp and floating the entrance of the soloist above it. Notice how other composers might have complexified this considerably. Something I haven't talked about much yet is the subtlety and simplicity of his orchestration. The solo violin echoed by the solo clarinet is an example, but very characteristic of Sibelius, as we will see in other pieces, is the way he uses the tympani as a color rather than a percussive rhythm. They are often found, as here, with a quiet supporting tremolando. In fact, he usually uses them for the color.

Something else Sibelius does in the Violin Concerto is, after this opening exposition, which gives us the basic themes in constantly evolving forms, there is a big cadenza for the violin which acts as a development section, formally! I think this is a unique function for a cadenza. Rather a great thing to do as it gives the cadenza an important formal function instead of just being a little jaunt into the virtuosic for the soloist.

I think that gives you enough to get a real sense of the concerto, so let's listen to the whole piece. Here is Hilary Hahn in younger days:


Now go buy her CD with the Sibelius and Schoenberg concertos!
Posted by Bryan Townsend at 9:46 AM