Normally, when I am talking about a specific piece of music I like to have the score both so that I can get down to specifics and so that I don't make stupid mistakes. It is always illuminating to see how things are notated. So reviewing an album, Hilary Hahn's new recording of 27 newly-commissioned encore pieces for violin and piano, where the scores are not going to be readily available, is going to be a challenge. Hilary says in her notes to the album that "If you're captivated by a certain piece, you can acquire the score and study its architecture." Well, maybe, but it can take a while. I ordered a copy of Astor Piazzolla's Histoire du Tango for flute and guitar on September 10, but due to the first shipment getting lost somehow, didn't actually receive it until -- yesterday!! So I would say that the odds of being able to assemble many of the scores to Hilary's commissioned pieces is pretty low. Let's see. The first piece on the album is Impulse by Franghiz Ali-Zadeh. She is an Azerbaijani pianist and composer currently living in Germany. Her music is published by Chester, it seems and here is a link to the complete list of pieces available. It does not include Impulse. So, no luck there.

Based on just listening, Impulse is a very virtuoso piece for the violin. From time to time there is a dotted pedal figure in the piano. The harmonic language seems to hover between modal and atonal. There do seem to be some cadential arrival points, but what is in between is pretty chromatic. Texturally, the effect is of an agitated cadenza in dialogue with the piano.

The next piece, by Somei Satoh is called Bifu. His music is published by Zen-On and here is a link to the list of his works. Yes, all in Japanese! In any case, the piece is much simpler than the previous one, consisting merely of soft wispy, chromatic arpeggios in the piano with a modal violin melody floating above in long notes. Very pretty.

Du Yun is a Chinese composer/performance artist based in New York. Her contribution is titled When a Tiger Meets a Rosa Rugosa and it involves a lot of microtonal sliding around, which is something violin is particularly good at. The piece is listed on her web page, but no information as to how to get the score. There are a lot of double stops that sound very difficult! The mood at the beginning is what I might call "bluesy-lyrical" but there are furious interjections and it becomes more and more agitated. I can't actually get a sense that there is an underlying structure as it all sounds rather arbitrary. I'm not saying there isn't a structure, but just listening a couple of times, I don't get a sense of one. Could two musicians have improvised this completely from scratch? Quite possibly. I call this the "Green Card" test, after the scene in the movie where Gerard Depardieu fakes contemporary music on the piano. Could the same effect have been obtained by random improvisation? Possibly.

The next piece is, on the other hand, extremely organized in a constant stream of notes on the violin accompanied by light "comping" on the piano. The piece is called light moving by David Lang. He is an American composer living in New York who won the Pulitzer Prize in music in 2008. Quite charming in a subtle way.

Bun-Ching Lam was born in Macau and educated in Hong Kong and San Diego. Her piece Solitude d'automne is subtle, introverted and uses a lot of veiled colors and harmonic washes of sound. The piece is mentioned on her web site list of works and it appears as if you could obtain a copy of the score direct from the composer.

Paul Moravec, an American composer who won the Pulitzer Prize in music in 2004 has written the next piece titled Blue Fiddle. He has said of his music that "the overall harmonic context of my music derives from the tonal tradition, which after all is the lingua franca of Western music — essentially, Monteverdi to the Beatles and beyond." The pieces has slow lyric sections and fast motoric ones and yes, there is a sense that there is an underlying tonal structure. There is most definitely a final cadence.

The seventh piece on side one is Third Sigh by Antón Garcia Abril, a Spanish composer who for a long time was professor of composition and form at the Royal Conservatory in Madrid. I suppose that we could call the idiom "extended tonality" though I have always wondered what that really meant! In this case, while there is a lot of chromaticism, there is a tonal center. I am just slightly reminded of the music of Federico Mompou, the Catalan composer: passionate, but with a touch of impressionism.

I think, in order to give the album the attention it deserves, I am going to have to break discussion up into a few posts. This was half of side one, so I guess I might spend three more posts just talking about the music on the album. Nothing wrong with that!

Here is a link to the Amazon page where you can listen to a little bit of each piece and order the CD. And here is a photo of Hilary Hahn from the back cover of the notes: 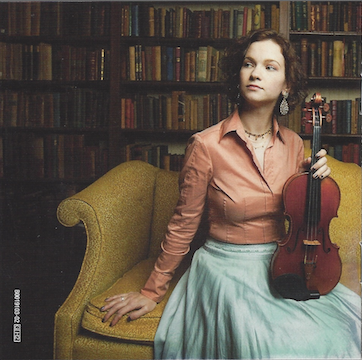 Posted by Bryan Townsend at 8:19 AM

Besides the one encore which was the competition winner, there were ten honorable mentions which didn't make these CDs, but Hillary is performing them. One of those is by a composer whose work I selected to win in a string orchestra composition competition in Poland several years back. The other two judges weren't sure about it, but I pushed it through with a compromise for third place (knocking out a very academic piece).

So maybe Hillary has good taste? I'll have to check out these encore CDs.

I didn't know about those. This is out of about four hundred contestants? Do you remember the name of the composer in the Polish competition?

It is very interesting listening through this cross-section of recent compositions.

I wasn't in love with his music or anything, but it was better than most of the 50 or 60 scores we went through. Since then his music was recoded for Naxos. Here it is-

Thanks, Nathan. I will have to investigate.